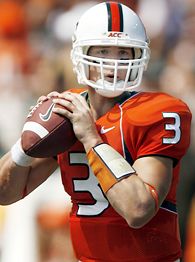 But in new Hurricanes coach Randy Shannon's first preseason camp, the quarterbacks haven't grabbed headlines. Shannon, the former defensive coordinator who succeeded Larry Coker as coach, has made his quarterbacks off-limits to the media. Shannon apparently wanted no distractions while senior Kyle Wright and junior Kirby Freeman battled for the starting job.

No big deal. Given the school's rich tradition in the passing game, Miami's quarterbacks have been rather anonymous since Dorsey left in 2002.

In two seasons as a starter, Wright has been unable to lead the Hurricanes back to the upper echelon of the sport. Inconsistent play in the pocket is a big reason Miami fell on hard times the past two seasons, leading to Coker's firing even after winning a national championship in 2001 and compiling a 35-3 record in his first three seasons.

In the past three seasons, when Miami lost three times as many games as it did from 2000 to 2003, the Hurricanes ranked no better than 43rd in passing in Division I-A.

In fact, Miami (Ohio) threw the ball much better than the U. in each of the past three seasons.

Wright, a 6-foot-4, 225-pound native of Danville, Calif., was the country's most highly recruited quarterback during his senior season at Monte Vista High School in 2002. After redshirting as a freshman and playing behind Brock Berlin in 2004, Wright entered each of the past two seasons as the team's starter. He led the ACC with 18 touchdown passes in 2005 but struggled last season before missing the final four games with a broken thumb.

Freeman, from Brownwood, Texas, didn't fare much better in four games as a starter. He threw five interceptions in his first three starts, but rebounded to throw for 272 yards and two touchdowns in a 21-20 victory over Nevada in the MPC Computers Bowl.

After three weeks of preseason camp, Shannon and new offensive coordinator Patrick Nix aren't revealing much about which quarterback will start this season. Nix said a starter will be named by Tuesday, four days before Miami's opener against Marshall.

"Both of them have done great," Nix said. "They've both progressed well, competed well and practiced well. I sat down with both of them and told them this is a whole different ballgame. I told them both of them would have an equal shot to win the job and there would be an open competition."

Nix, who left Georgia Tech to take over Miami's offense, wouldn't rule out playing both quarterbacks this season. Shannon also hinted last month that he wouldn't be opposed to rotating quarterbacks.

Rebuilding Wright's confidence was one of Shannon's first tasks as head coach. Wright has been much-maligned at Miami after arriving with such high expectations. He has a 14-7 record as a starter after the Hurricanes lost four of five games he started last season.

Playing at a quarterback factory such as Miami might be additional pressure, but Nix said his quarterbacks aren't under any more scrutiny than quarterbacks elsewhere.

Miami's dearth of big-play receivers hasn't helped its quarterbacks. Oft-troubled receiver Ryan Moore was a big-play threat, but he played in only five games before he was kicked off the team last year. Tight end Greg Olsen led the team with 40 catches last season.

The Hurricanes' running game might make the quarterbacks look better this year. Sophomore tailback Javarris James, a cousin of former Miami and current Arizona Cardinals running back Edgerrin James, ran for 802 yards and four touchdowns last season, the second-highest rushing total by a Hurricanes freshman. Graig Cooper, who enrolled at Miami this spring after spending the fall at a prep school, has been just as impressive in preseason camp.

"You don't need a great quarterback to throw the ball 20 times down the field or always go for the long ball," Shannon said. "I always tell people that John Elway didn't win a Super Bowl until he got that tailback."

Shannon said he has encouraged Wright to worry less about throwing vertically, even though the quarterback has been criticized for being too conservative in the past.

During one meeting, Shannon asked Wright to recall his longest pass play at Miami. It was a 92-yard touchdown to Sinorice Moss in a 34-3 win at Temple in 2005.

"It was a 1-yard hitch to Moss," Shannon said. "He was a great athlete, one guy missed and it was a touchdown. It doesn't always have to be the deep ball. Sometimes, a quarterback's first instinct is to always throw the ball deep."

If nothing else, senior offensive lineman Derrick Morse said, the Hurricanes will be less predictable this season.

"My mom doesn't know anything about football, and she knew what was going to be called last year," Morse said.

The question remains: Who will be making the calls in the huddle?