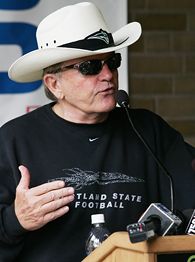 And part of that dream includes convincing anyone who will listen that coaching Portland State University is the best job in college football.

So on Day 2 of fall practice -- better known as "Breakfast with Jerry" here on the Park Blocks -- it's no surprise to see the Pied Piper of Portland walking around the Peter W. Stott Community Field shortly after 7 a.m. in his familiar all-black outfit -- complete with sunglasses.

He doesn't seem to notice it's cloudy and raining.

In Jerry's world, black isn't simply a color. It's an attitude. And it includes sunglasses.

Even though the 65-year-old former NFL coach (and race car driver) will be prowling a college sideline as a head coach for the first time in his colorful and lengthy career, he's convinced that the move from Honolulu, where he was Hawaii's defensive coordinator the past two seasons, was the right one.

"It hit me that this is a better job than anyone in the country thought it was."

When he made the trip from Hawaii to Oregon for an interview in late February, it was simply as a courtesy to his then-boss June Jones and his long-time friend Mouse Davis -- a pair of Portland State Hall of Famers.

"Two people that love the program asked me to come for the interview," Glanville said. "I didn't want to come, I had no interest. But two people that I respect and we're all connected at the hip said you've got to go and at least talk to them.

"When I came for the interview I found that the support was unbelievable and they want this to be special. If I came here and didn't find any of that, then you say thanks for the trip and you go home. I was overwhelmed during the interview process of how important it is to so many people.

"I'm more proud to be here every day because you find another reason why. We're in the world's best-kept secret."

On this day, the weather is helping that cause.

So, too, are the Oregon's two Division I-A programs. Both Oregon and Oregon State, thanks in large part to their recent success, command much of the state's fan and media attention when it comes to football.

And then there's the city's love affair with this summer's No. 1 overall NBA draft choice Greg Oden.

But none of these obstacles concern Glanville. Neither does the lack of amenities currently at his disposal.

And the Vikings must share the urban school's one practice field with seemingly anyone and everyone. Following Monday's first practice, Stott Field, which was missing its only goalpost thanks to some vandals, was used for a high school cheerleading camp, ultimate Frisbee and a women's club soccer team.

Portland State also has no training table to help properly feed its athletes, something Glanville is working to change.