For a guy accustomed to moving forward, sideways and diagonally at great speeds, Damion Fletcher isn't used to being knocked back on his heels. 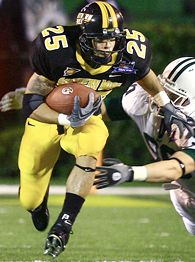 It takes something powerful, like the fast-spreading belief that Fletcher is the new face of Conference USA, to stagger the Southern Miss sophomore running back.

"Man, that's crazy right there," Fletcher said, laughing in amazement. "To be the face of the league, it's something. I'll be honest. That's a big thing."

Fletcher is considered the next big thing in a conference starved for frontmen.

Southern Miss coach Jeff Bower had reservations about bringing Fletcher to the Conference USA media blitz in July, but he yielded when the league, swamped with media requests for Fletcher, asked that the sophomore be in New Orleans. Of the 24 players who attended the event, only five were underclassmen.

The acclaim flatters Fletcher, who admires the league's last superstar running back, former Memphis standout DeAngelo Williams. But he won't let himself get carried away.

"I've got a lot of people that keep me grounded," he said. "When my head's getting too big, they kind of pop that bubble. It's a group thing."

Anthony Gray plays a key role. Fletcher might be big man on campus, but Gray, a 311-pound defensive tackle for Southern Miss, is the biggest man in the room they share. The two met at a track meet in high school -- Fletcher ran hurdles and did the jumping events, Gray was a shot-putter -- and have been close ever since.

To trigger Fletcher, Gray will mention the hype surrounding Golden Eagles freshman running back Antwain Easterling, a four-star recruit. (Easterling had his pick of top-tier programs until most backed off when he was charged with second-degree lewd and lascivious battery after having consensual, but illegal, sex with a 14-year-old girl.)

"Before, no one was questioning [Fletcher's] ability," Gray said. "But now, since Antwain Easterling got here, everyone wants to question his ability. I told him, 'You've just got to go out there and show 'em what you've got, do what you've got to do because I know you've got it.'"

When contact drills began, Fletcher zipped to the front of the line.

"I knew before the first game. I felt like he was our best back," Bower said. "But going into Florida, he's a true freshman, so we didn't want to start him."

Fletcher didn't start the season opener in Gainesville, but carried a team-high 18 times for 89 yards, a better total than Darren McFadden, Lorenzo Booker or Antonio Pittman had against the national champs. Fletcher also had two receptions for 38 yards and didn't lose a yard.

Before, no one was questioning [Fletcher's] ability. But now, since Antwain Easterling got here, everyone wants to question his ability. I told him, 'You've just got to go out there and show 'em what you've got, do what you've got to do because I know you've got it.'

"It was going a million miles an hour," Fletcher recalled of playing in The Swamp, "but I just kept calm, you know, just played. They let me play that game. After that, I was like, 'I can do this.'"

He made his first career start the next week against Southeastern Louisiana, gaining 116 yards. The 5-foot-10, 175-pound Fletcher followed that with three consecutive 100-yard games.

"It was kind of, 'Let's see how much we can keep feeding him,'" Messingham said.

Fletcher was ravenous. He rushed for 163 yards against UAB and followed with 151 yards against Marshall as the Golden Eagles rallied to win the East Division title.

Facing Fletcher in practice, Gray could empathize with opposing defenders.

"There's no telling which way he's going to go," Gray said. "You've got to be ready to make the tackle at any moment because he can cut back on you and get 20 extra yards when you thought you could have had a tackle for a 3-yard loss."

Fletcher describes himself as a finesse runner.

Fletcher was forced to reverse field in August 2005, when he and his family fled their home in Biloxi, Miss., a day before Hurricane Katrina struck. They sought refuge with an aunt in Fort Walton Beach, Fla.

Watching the news reports the next day, Fletcher feared the worst.

"It was just devastating," he said. "There was always a little hope for me, but then again, it was like, 'Man, this is just bad. I know everything is probably gone.'"

About a month passed before Fletcher returned to Biloxi.

"Everything was gone," he said. "All my high school trophies, plaques, awards, anything I ever had, I lost all of it. I went down to the park, the gym I used to go to all the time. It was just so weird without all the things that had been there my whole life. Just gone, like gone forever."

It was during the hours after Katrina, with his past destroyed, that Fletcher firmed up his future. He called Bower and committed to Southern Miss.

"I didn't know what was going to happen the rest of that year, so I just wanted to go ahead and be sure I had a place to go, to call home," Fletcher said. "I was already thinking about it, so the storm just pushed me to go ahead and do it."

Fletcher's mother, sisters and grandmother moved near Fresno, Calif., where they still live. Damion stayed in Florida, unsure of where he would spend his senior year.

Gray called Fletcher and asked if he wanted to move upstate to Philadelphia, Miss. Fletcher could stay with Gray, finish high school and play a season with his future college teammate.

The running back considered Gray's offer and also played a game for Fort Walton Beach High.

Then Fletcher got a call from his coaches at Biloxi High.

"They said, 'We might have a season,'" Fletcher recalled. "There's no way I could stay away."

Fletcher returned to Biloxi and began living with Joe St. Amant, an assistant coach. He ended up rushing for 952 yards and 13 touchdowns as a senior.

"Just being back and being able to play football," Fletcher said, "it kind of kept our minds off all that other stuff off the field with Katrina and everybody's house being gone."

Despite rushing for 1,750 yards as a high school junior, Fletcher received only two scholarship offers, from Southern Miss and Arkansas State. Fletcher said a lack of exposure in Biloxi hurt his stock, but he entered college with plenty to prove.

Southern Miss coaches were sold on Fletcher after seeing him at their camp.

"A guy that could run, jump, had a lot of natural ability," Bower said. "I guess we did our homework a bit better than others."

Opposing teams won't overlook Fletcher or his team this fall.

Southern Miss was picked to repeat as East Division champs in the Conference USA preseason coaches' poll. Fletcher's ascent to league poster boy should bring more defenders to the box this fall.

"Last year was last year, and expectations are even higher of you," Bower has told Fletcher. "People know about you now. Things will be a little bit tougher."

"He's not going to change," Gray said. "Once he's one the field, he's a workaholic."