SOUTH BEND, Ind. -- Charlie Weis put his hands on his hips, wrapped them behind his back and rubbed the ridges of his face. 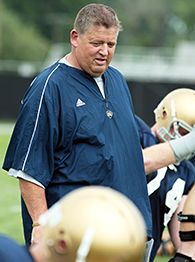 He crossed his arms, swayed from side to side and stood up straighter. Despite all the fidgeting, his eyes never budged. They remained locked on the five quarterbacks lined up before him, particularly the three in the middle: Demetrius Jones, Evan Sharpley and Jimmy Clausen.

Play-action drills during the first practice period usually don't merit such close scrutiny from the head coach. Especially when no passes are being thrown.

But Weis, in his third year at Notre Dame, is leaving nothing to chance.

How he molds and manages Notre Dame's new starting quarterback -- Jones, Sharpley or Clausen -- will largely define his open-ended tenure under the golden dome.

Weis has unquestionably enhanced Notre Dame's reputation on the field and especially on the recruiting trail, but an 0-4 record against teams that finished the season ranked in the Top 10 raises doubt about a man awarded a lucrative 10-year contract just seven games into his stay. Labeled an offensive genius after winning three Super Bowl rings with the New England Patriots, Weis still has the smartest-guy-in-the-room swagger, but brainpower has yet to produce a bowl win.

So is Weis the solution for Notre Dame? Check back in December.

"We have stability in the program," Weis said at media day. "Now we need to take that level of stability and win a few more football games."

The Irish must replace starters at every offensive skill position except tight end, as well as three-fifths of the offensive line. They must acclimate to the 3-4 defense implemented by new coordinator Corwin Brown, and find ways to hamstring opposing receivers. And they have to adapt quickly, as a pitiless schedule features four of the first six games on the road and four of the first eight against preseason top-20 teams (No. 1 USC, No. 5 Michigan, No. 14 UCLA and No. 17 Penn State).

Such an undertaking would seem to jack up stress in an already taxing environment, but Weis is keeping his cool.

"The pressure that you feel that comes with this, I don't feel," he said. "I feel better now than I felt the last two years. I feel great. ... I know the indecision or the question marks that come into it. I'm not oblivious to that, I'm not ignorant. I understand that a bunch of guys are gone.

"But to me, that makes you even more driven and provides even greater challenges."

Added offensive line coach John Latina: "He's a perfectionist, like most coaches try to be. Coach is very motivated. Hopefully, we all are, too."

Weis might be more motivated this season, but his enthusiasm hasn't become impatience.

He said that Brady Quinn's successor at quarterback can't merely be a game manager -- there's too much inexperience elsewhere on offense to coddle the signal caller. But the three competitors, who between them have two collegiate pass attempts, aren't being pushed too fast, either.

"He's done a great job choosing what to say and what not to say," said Sharpley, who served as Quinn's backup last season. "He's been able to be a lot more hands-on with us."

It has been an adjustment for Weis, whose tough-love approach with Quinn produced masterful results.

"You want to say something, but you find yourself biting your lip," Weis said. "You pick and choose when to ride them, and it's not as often as you normally do."

Weis has chosen his starting quarterback for the opener, but he won't name him publicly before Sept. 1. The coach on Thursday insisted his secrecy is not a gimmick, but a strategic advantage against Georgia Tech (though it's hard to think veteran defensive coordinator Jon Tenuta will lose sleep over three tenderfoots).

All three candidates continue to take reps with the first team, but Jones, who worked with starting running back Travis Thomas and starting center John Sullivan at an Aug. 11 open practice, appears to be the unofficial frontrunner. Weis hasn't told his quarterbacks who claimed the top job, but said, "If they haven't figured it out by now, then they're not very smart."

No matter who starts, Weis will proceed with caution when it comes to calling plays this fall. 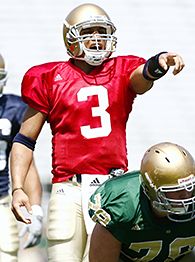 "Too many coaches in this position -- where you go from an experienced guy to an inexperienced guy -- let their ego get the best of them," Weis said. "They like a play, but the quarterback doesn't understand the play. But they call it anyway. And usually it's set up for failure.

"When I was younger, I had all the answers. But you get hardened over the years and you realize that it just didn't cut it."

Less than three weeks after LSU pounded the Irish in the Sugar Bowl, Weis replaced coordinator Rick Minter with Brown, saying he had hoped to hire the 37-year-old former New York Jets assistant when he first arrived at Notre Dame. Brown has tried to instill a new attitude on defense, and his assertive 3-4 scheme rings a bell for Weis, who for years watched Bill Belichick use it with the Jets and New England Patriots.

"We didn't change the terminology that much compared to what [Weis] was used to," defensive line coach Jappy Oliver said. "When we say something, he knows exactly what we're talking about. When he wants to add his two cents making a technique change here and there, he'll voice his opinion because he feels more comfortable."

Weis accepts responsibility for not being clued-in enough to the previous defense.

"When [I was] watching tape sometimes, I couldn't critically evaluate exactly what I thought the problems were because I wasn't always on 100 percent the same page," he said. "Now the guy who knows the defense second after Corwin probably is me."

Weis' increased knowledge should be a big help, given the question marks Notre Dame has on defense.

With Thomas returning to running back and Joe Brockington moving to inside linebacker, Notre Dame is adding two new starters at outside linebacker. Senior Anthony Vernaglia has only five tackles in 13 career games, and former reserve defensive end John Ryan takes on a hybrid role.

Despite a spotty track record, the secondary boasts both experience and young talent. Safety Tom Zbikowski and cornerback Ambrose Wooden need bounce-back seasons, while David Bruton, Darrin Walls and Raeshon McNeil will have opportunities to emerge.

"When [Weis] first got here, talking about being nasty, I think that's the type of team we're going to have this year," Zbikowski said.

Thomas said the new personnel, new schemes and tempered expectations for the Irish remind him of Weis' first season. The big difference, of course, is the new face under center.

Weis received sweeping acclaim in 2005 after Quinn set school records for passing yards (3,919), passing efficiency (158.4 rating), completions (292) and completion percentage (64.9). Two years later, the coach will once again stand beside his quarterback, ready to be judged.