Editor's note: Kirk Herbstreit is back for his 13th annual Herbie Awards. Check out how he ranked the best of this upcoming college football season and then make your own selections to see how America voted.

Due to the uncertainty surrounding Johnny Manziel this season, he was not included in these categories.

Be sure to watch "The Herbie Awards" airing on ESPN2 at 10 p.m. ET Wednesday. 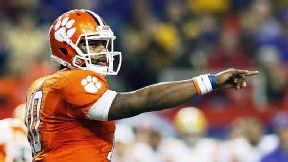 Tajh Boyd led Clemson to its first 10-win season since their national title in 1981.