NEW ORLEANS (AP) -- Auburn filled in a piece of its improbable
championship puzzle by hanging on in the Sugar Bowl, though it was
hardly a masterpiece.

Auburn (13-0) had a couple of second-half turnovers and gave up
an 80-yard touchdown pass with two minutes left -- a major blow to
their hopes of swaying the voters to split No. 1 again.

Not that the Tigers were willing to concede anything to the
winner of Tuesday night's Orange Bowl between No. 1 Southern Cal
and No. 2 Oklahoma.

"Neither team is better than us," coach Tommy Tuberville said.
"We'll play them anytime, anywhere."

Virginia Tech (10-3) could have made things even easier on the
Bowl Championship Series by upsetting Auburn. But the Hokies had a
couple of major blunders, dropping a pass in the end zone and
missing a chip-shot field goal.

When Bryan Randall threw a 29-yard touchdown pass to Josh Morgan
with 6:58 left in the game, ruining the shutout, one could almost
sense that USC, Oklahoma and -- especially -- the BCS were breathing
a little easier.

Randall dealt another blow to the Tigers when he threw the long
touchdown pass to Morgan, surely costing a few more votes.

Auburn recovered the onside kick and kneeled down to run out the
clock, deciding to preserve the victory rather than try to win more
impressively.

The Auburn band even launched into a Bon Jovi song that summed
things up for the Southeastern Conference champions: "Living on a
Prayer."

"I just wanted to win by one," said Tuberville, who nearly
lost his job at the end of last season. "That's all that counts.
If you have to win with style points, you might as well throw out
all the systems."

Campbell was named MVP after completing 11-of-16 for 189 yards
with one interception. Randall threw for 299 yards but was picked
off twice.

The odd team out in a troika of 12-0 teams, Auburn settled for a
spot in the Sugar Bowl against the Hokies, while USC and Oklahoma
were tapped for the Tuesday night's Orange Bowl -- the BCS title
game.

Nothing ever seems to work out smoothly in Division I-A
football, the only college sport that insists on using a mix of
polls and bowls to determine its champion rather than settling
things with a playoff.

Auburn's hopes were based on this convoluted scenario: The
Tigers defeat Virginia Tech convincingly, Oklahoma knocks off USC
in an ugly Orange Bowl and enough voters in The Associated Press
media poll picks Auburn as the No. 1 team, creating a split
championship.

The winner of the Orange Bowl is assured of being voted No. 1 in
the coaches' poll. But the AP rankings aren't tied to the BCS. 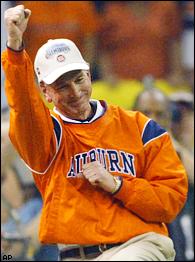 Last season, USC was voted No. 1 by the AP after winning the
Rose Bowl, while LSU won the BCS title by beating Oklahoma in the
Sugar Bowl.

The overlooked Hokies hurt themselves with those two major
miscues. Jesse Allen dropped a sure touchdown pass on
fourth-and-goal at the 1 midway through the second quarter. Then,
Brandon Pace yanked a 23-yard field goal just left of the upright
early in the fourth.

Carnell Williams, half of Auburn's heralded running back duo,
was held to 61 yards rushing. He also fumbled in the fourth quarter
when the Tigers, leading 16-0, were driving for the touchdown that
could have made the victory a lot more convincing.

Auburn had a chance to blow it open in the first half, too, but
went 0-for-3 from inside the Virginia Tech 10. The Tigers had to
settle for three short field goals by Vaughn, who connected from
23, 19 and 24 yards for a 9-0 lead at halftime.

After taking the second-half kickoff, Auburn finally drove all
the way to the end zone. The biggest play was a third-and-16, when
Campbell scrambled near the Virginia Tech sideline and spotted
Anthony Mix breaking open, connecting with him on a 53-yard pass.

Then, on third-and-2 from the Virginia Tech 5, Campbell froze
the linebackers with play-action and hit Devin Aromashodu on a
quick slant over the middle for Auburn's first TD.

It would be their only one, hardly the sort of definitive
statement the Tigers hoped to make with the nation -- and all those
crucial voters -- watching.

"It was a defensive battle," Tuberville said.

That wasn't surprising. Auburn gave up fewer points per game
than any team in the country, Virginia Tech was just two spots
behind in the national rankings.

Trotting onto the Superdome turf beneath a sign that said, "Go
Auburn, Biased Championship Series," the Tigers got off to a
roaring start.

Campbell threw a 35-yard pass to Cooper Wallace on Auburn's
first offensive play, then Ronnie Brown broke off a 31-yard run on
the next snap. But the Tigers bogged down at the 5, settling for
Vaughn's first field goal.

That would set the tone. Auburn drove inside the 10 on two more
possessions, but the Hokies bucked up to keep the Tigers out of the
end zone. Vaughn connected two more times from chip-shot range,
tying the Sugar Bowl record for field goals in a half.

Trailing 6-0, Virginia Tech squandered its lone chance to seize
the lead. Randall connected with Josh Hyman on a 31-yard
completion, giving the Hokies first-and-goal at the Auburn 2.

Mike Imoh was stopped for no gain and Randall threw an
incompletion. Randall got just inside the 1 on a third-down run,
and the Hokies decided to go for the TD rather than settle for a
field goal.

Virginia Tech called the right play -- Randall faked a handoff to
Imoh and flipped a pass to Allen, normally a blocker who had
slipped free out of the backfield.

But the ball skidded right through his hands, giving possession
back to Auburn.

The Tigers then drove 92 yards to set up Vaughn's third field
goal, drawing a disgusted reaction from Virginia Tech defensive
coordinator Bud Foster. He ripped off his cap in anger after
watching Auburn drive nearly the length of the field.

A voter in the coaches' poll, Beamer had already decided to
anoint the Orange Bowl winner as No. 1. Auburn will have to settle
for No. 2 on his ballot.