SOUTH BEND, Ind. (AP) -- With the West Coast offense looking as
innovative as the option Notre Dame abandoned this season, the
Irish defense and special teams led the way again. 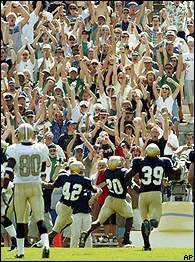 The Irish, who got off to their worst-ever 0-3 start last
season, are 2-0 without scoring an offensive touchdown.

"A team with one element not performing as well as you'd like
it to for a variety of reasons, another element has to step up. I
think our football team did that,'' Notre Dame coach Tyrone
Willingham said.

The Boilermakers lost three fumbles and an interception, leading
to all three Notre Dame touchdowns.

"Whenever I've been around a closely contested football game in
all the years I've been a coach, it comes down to one thing, and
that one thing is turnovers,'' Purdue coach Joe Tiller said.

Duff, whose 76-yard punt return against Maryland last week put
the game away, made the decisive play again by picking off Kyle
Orton's pass and returning it 33 yards for the score.

Sapp was the first to score for the Irish defense, picking up a
Motrell Lowe fumble and returning it 54 yards for a touchdown early
in the second quarter. Sapp broke through three tackles, spinning
out of the arms of one Purdue player, then followed a convoy of
seven Irish players into the end zone.

On the ensuing kickoff, Deaunte Ferrell mishandled a squib kick
and ran back to the 1-yard line to pick it up. He ran to his left,
but Notre Dame's Justin Thomas drove Purdue's Drew Rucks back into
Ferrell, and the ball popped free.

Bolen caught the ball in the air at the 4-yard line and ran in
for the touchdown to give the Irish a 14-0 lead.

Notre Dame' best offensive scoring chance came on its next
possession when it had first-and-goal on the 6-yard line. But Ryan
Grant, who had 86 yards on 21 carries, was tackled for a 1-yard
loss, and then he dropped a pass.

Quarterback Carlyle Holiday ran up the middle for a 5-yard gain,
but Willingham settled for the field goal on fourth-and-2.

The Boilermakers overcame a 17-0 deficit to tie the game,
scoring on a 76-yard punt return and a 3-yard run by Jerod Void.
The Boilermakers appeared to have the momentum, since the Fighting
Irish offense couldn't score a touchdown.

"A couple of us on offense, we felt real embarrassed about not
having scored in two games,'' Holiday said. "We know as an
offensive team that we have to make touchdowns. We have to work on
some things to become a better ball club.''

The Boilermakers turned the ball over twice in the fourth
quarter but still had a chance, driving to the Notre Dame 30 on
their final possession. But they lost 6 yards on a reverse to Ray
Williams, stalling the drive.

On fourth-and-13, Orton was chased hard by Ryan Roberts and
threw the ball away to avoid the sack.

"If we score 17 points, then our defense needs to hold them to
16,'' Tiller said. "If they score 24 points, then our offense has
to score 25. This is a football team, this is not an offense or a
defense.''

Willingham was just pleased with another win to continue
building the program.