PHOENIX (AP) -- On a chilly night in a baseball park, the
Pittsburgh Panthers became the bullies of the Big East. 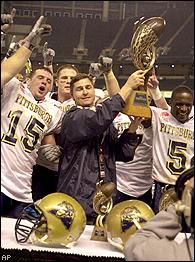 The Panthers (No. 23 ESPN/USA Today, No. 24 AP) dominated the trenches and held Steven Jackson to a season-low 34 yards on 19 carries in a 38-13 victory
over Oregon State on Thursday night in the Insight Bowl.

Pitt's victory at Bank One Ballpark came a few hours after Boston College's 51-25 rout of Toledo in the Motor City Bowl, making the Big East 2-0 in bowl competition.

"I think people cannot ever refer to it as the Big Easy anymore,'' Pittsburgh coach Walt Harris said.

Pitt -- a team that nearly beat No. 1 Miami -- pulled away from a 10-10 halftime tie by pushing the Beavers around on offense and defense in the second half.

"We showed that we were the better conditioned team,'' Panthers defensive end Claude Harriott said.

Pittsburgh won nine games in a season for the first time in 20 years.

"It's a good feeling,'' said Panthers quarterback Rod Rutherford, who passed for a touchdown and ran for another. "In the beginning of the season, I had a lot of doubters. I was just going out, not trying to be macho about it, that I can do whatever I want if I want to do it.''

Brandon Miree rushed for 113 yards, including a 7-yard touchdown run, and was selected the game's MVP.

"We knew they were a tough defense, No. 10 in the nation coming in,'' Miree said. "But we felt we were a physical football team. We've been physical with all the teams that we played this year. I think we opened some eyes around the country.''

Jackson, who had gained fewer than 100 yards in just three games
all season, broke loose only once, a 60-yard gain that was called
back by a holding penalty.

"They played very physical against us,'' Oregon State coach
Erickson said. "It did surprise me, because I thought we could run
the football against most people, and we couldn't tonight.''

Shawn Robinson became the first Pitt player to return a punt for
a touchdown in the school's 22 bowl appearances.

"It was easy for me,'' Robinson said of his first career punt return for a TD in his final collegiate game. "My teammates did all the work.''

The Panthers (9-4) broke a 10-10 tie with a pair of TDs in the
third quarter. Tez Morris' interception set up the go-ahead
touchdown on Rutherford's 1-yard run, then Robinson broke a pair of
tackles en route to his 66-yard punt return to make it 24-10 with
3:26 to go in the third quarter.

"That was the turning point,'' Harris said, "that and the
field goal at the end of the half.''

Derek Anderson completed 21 of 44 passes for 318 yards for
Oregon State (8-5). James Newson caught 10 for 165 yards for the
Beavers, including a remarkable 65-yard touchdown play.

Rutherford was 13-for-26 for 183 yards. Larry Fitzgerald made a diving grab of Rutherford's 40-yard pass for the game's first touchdown.

Newson caught Anderson's pass near midfield and was hit by
defenders Torrie Cox and Brian Beinecke. Newson went down, but
caught himself with his right hand and his knee never touched the
ground.

The Oregon State receiver scampered to his feet and ran to the
end zone on a 65-yard scoring play to tie it at 7 with 9:52 to go
in the first quarter.

"I didn't feel my knees touch the ground. The only thing that
touched the ground was my forearm,'' Newson said, "so I just got
up and started running.''

The Beavers took a 10-7 lead on Kirk Yliniemi's Insight
Bowl-record 50-yard field goal, then Pittsburgh tied it at 10 on
David Abdul's 45-yarder as the half ended.

Yliniemi also kicked a 34-yarder with 34 seconds left in the third quarter, his 15th consecutive made field goal to tie a school record.