STATE COLLEGE, Pa. (AP) -- Penn State coach Joe Paterno didn't
like his team's attitude during a close first half against Central
Florida. Paterno was considerably more pleased by the middle of the
fourth quarter.

The Nittany Lions (No. 23 ESPN/USA Today, No. 24 AP) scored 17 unanswered in the second
half, then withstood a late charge by Central Florida to win 27-24 on Saturday in the season opener for both teams. 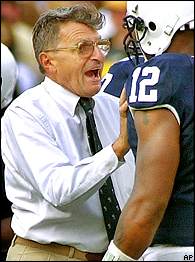 "I was a little disappointed with our enthusiasm in the first
half. It looked like we were flat,'' Paterno said. "We were ahead
10-9, and some guys were acting like we were behind.''

Anthony Adams recovered a fumbled snap on the Central Florida
22-yard line early in the third to set up a field goal. After a
short punt, Penn State had first down at the Golden Knights' 45,
and Tony Johnson caught a 21-yard touchdown pass from Zack Mills to
give the Nittany Lions a 20-9 lead.

"The third quarter was a catastrophe,'' Central Florida coach
Mike Kruczek said. "We shortened the field for the defense, and
(Penn State) performed spectacularly.''

The win was No. 328 for Paterno, who leads the all-time list.

Ryan Schneider completed 32 of 46 passes for 345 yards with one
touchdown and one interception to lead Central Florida. Doug
Gabriel caught 11 passes for 153 yards.

Mills was 13-of-20 for 194 yards and two touchdowns, and no
interceptions.

"He made some big throws and handled the option well,'' Paterno
said. "He kept that baby 'til the last minute, and then got it out
there.''

Penn State showed its offensive versatility in the fourth
quarter, when Tony Johnson and tight end Casey Williams each had
13-yard receptions and Mills gained 15 yards on a keeper. The drive
ended when Paul Jefferson scored from 8 yards out on the option to
make it an 18-point lead.

Derek Wake blocked a field goal by Central Florida early in the
fourth quarter to delay the Golden Knights' comeback.

Alex Haynes scored on a 2-yard run and Tavaris Capers caught a
pass from Schneider for the 2-point conversion to bring Central
Florida within 27-17 with 3:23 left. The Golden Knights then tried
an onside kick, but Tony Johnson caught it, and Penn State ran the
clock to 1:28 before punting back to Central Florida.

Central Florida went 80 yards on eight plays, scoring on a
6-yard pass from Schneider to Capers to get within 27-24 with 24
seconds left, but a second onside kick went into the hands of
Bryant Johnson, and the Nittany Lions ran out the clock.

The win ended two straight losses in season openers by Penn
State -- 29-5 to Southern California in 2000, and 33-7 to Miami last
year.

Penn State started out playing sloppily on both sides of the
ball. Alex Haynes broke several tackles on a 20-yard run up the
middle to set up Central Florida's first score, a 26-yard field
goal by Matt Prater. On offense, Mills threw a wobbly incomplete
pass, then threw a pitchout into the open field for a fumble.

The Nittany Lions went ahead 10-3 on a 23-yard run by Larry
Johnson and a short field goal from Robbie Gould, but Central
Florida responded with two more field goals by Prater -- including a
53-yarder with 1:09 left before halftime -- to get within a point.