LOS ANGELES (AP) -- Carson Palmer's final season at Southern
California is off to a fast start. 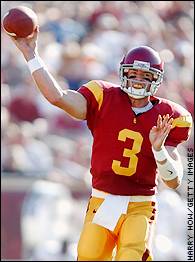 Palmer threw for 302 yards and a touchdown, and scored the
game-deciding touchdown on a sneak with 1:26 remaining as Southern
California (No. 16 ESPN/USA Today; No. 18 Associated Press) opened with a 24-17 victory over Auburn on Monday night.

''That fifth-year senior got us,'' Auburn coach Tommy Tuberville
said after the Tigers lost their opener in what was just their
second game ever in California.

''This offense knows what it's supposed to do, and we did it,''
Palmer said. ''I missed a couple of (throws) in the first half, but
I felt more comfortable in the second.

''Our receivers did a good job of getting open.''

Palmer bulled into the end zone from a yard out for the go-ahead
score in the teams' second meeting ever.

Still trying to live up to the high expectations that greeted
him at USC, Palmer completed 23 of 32 passes, including a 14-yard
touchdown pass, and was intercepted twice.

''Other than those two interceptions, it was the kind of game
you need from your quarterback,'' USC coach Pete Carroll said.

Tailback Malaefou MacKenzie, who often seemed overlooked by the
Auburn defense, had six catches for 117 yards and also carried 11
times for 31 yards.

Carroll, beginning his second year at USC, was pleased with the
opening victory against a tough opponent.

''We stayed with our game plan. Our timing was off, but I think
it will be OK in the future. We did not look as fast tonight as we
think we can be,'' he said. ''But it was very warm out there and I
think both teams slowed down because of the heat.''

Temperatures were in the 90s at kickoff time, and remained in
the 80s for most of the game.

Auburn's Carnell Williams ran for 94 yards on 21 carries and a
touchdown, but the Trojans' defense held him to minus-2 yards on seven
carries in the second half.

Daniel Cobb went 10-for-21 for 132 yards for the Tigers, with one
interception.

''Overall we had a good performance, good enough to win except
for our defense in the second half,'' Tuberville said.

After an Auburn drive stalled at the USC 22, the Tigers' Damon
Duval made a 39-yard field goal nine seconds into the fourth
quarter to tie it 17-17.

Auburn linebacker Karlos Dansby had an interception in the first
half and recovered a fumble by Kareem Kelly at the Tigers' 12-yard
line to turn away a threat in the fourth quarter.

The Tigers got some help from a Trojans mistake, and some luck
at the goal line to even it 14-all just before halftime.

Auburn punted from on fourth-and-14 from its own 15, but USC was
called for having 12 men on the field, giving the Tigers a first
down at the 30.

Cobb marched the Tigers down the field, then tried to score
himself on a scramble with time running out in the half, but he
fumbled at the USC 1. The ball popped into the air and into the
arms of Auburn tailback Ronnie Brown, who pushed it over the line
for the score with 11 seconds left.

Sultan McCullough gave the Trojans a 14-7 lead earlier in the
quarter when he scored on a 3-yard run to cap a drive that started
when Omar Nazel intercepted a Cobb pass at the USC 25 to end an
Auburn threat.

Williams tied the game 7-7 with his 23-yard scoring run one play
after Dansby made a lunging interception of Palmer's pass in the
flat.

The Trojans capitalized on a Cobb fumble for a touchdown moments
earlier. Mike Pollard recovered for USC at the Auburn 41, and
Palmer hooked up with Kelly on the 14-yard scoring pass.

The Trojans were coming off a 6-6 season. Auburn was 7-5 last
year, losing four of its last five.

In the previous meeting between the schools, the Tigers beat the
Trojans 16-7 in the 1987 Citrus Bowl.

In Auburn's only other trip to California, the Tigers were
beaten 12-0 at Santa Clara in 1936.