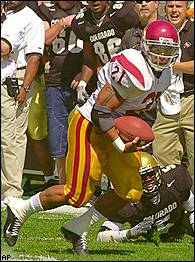 Malaefou MacKenzie had a pair of first-quarter touchdowns, and
Sultan McCullough ran for 110 yards and a TD as the Trojans (2-0)
generated 425 yards. Short-handed Colorado (1-2) had a meager 61
total yards and four first downs and suffered its worst home loss since 1983.

"So many things worked so well for us,'' Trojans coach Pete
Carroll said. "I think we handled the environment, we handled the
altitude. We ran the football like we haven't in a while.
Defensively, we didn't let them get into a rhythm. I'm glad we
could get some focus and play a complete football game.''

Carroll had to wrack his brain to find an area of concern.

"We had some problems in the kicking game, and those are things
we can get fixed,'' he said.

Southern California, coming off a bye week after a 24-17 opening
win over Auburn, posted its sixth straight regular-season victory
dating back to last season.

Colorado quarterback Robert Hodge, who got his first
major-college start because Craig Ochs was sidelined with a
concussion, led the Buffaloes to only 58 yards through three
quarters. Zac Colvin replaced Hodge in the final quarter.

"We were just awful,'' Colorado coach Gary Barnett said. "I
don't know what else to say. We were doubly awful on offense and
just awful on defense.

"We were totally inept on offense. I'm really disappointed that
we couldn't run the ball better. We knew going in that that was the
only way we were going to win.

"But I don't want to take anything away from Southern
California. That's a very good team and a well-coached team. I'm
embarrassed that we didn't give them a better game. They were
obviously ready to play, and we were not ready to play that caliber
of football today.''

The Trojans fashioned three 80-yard scoring drives, two of them
in the first quarter.

"We were just kind of dinking the ball around, a lot of quick
passes, short passes,'' Palmer said. "Guys were just making plays.
People were breaking tackles and getting the ball upfield.''

Palmer completed 17- and 21-yard passes to Keary Colbert to
highlight the first drive. On fourth-and-7 from the Colorado 32,
MacKenzie caught a short pass off the left side, broke three
tackles and scored.

Later in the period, the Trojans, aided by a pass-interference
penalty, reached the 14, where MacKenzie romped up the middle for
another TD.

Colorado's offense was ineffective in the early going. After
Hodge threw a 20-yard completion to Beau Williams on the second
play from scrimmage, the Buffs got only 16 yards on 12 plays the
remainder of the period.

Mark Mariscal was Colorado's lone weapon in the first half,
hitting punts of 57, 55, 67, 68, 50 and 62 yards to consistently
pin the Trojans in their own territory.

With 3:35 left in the second quarter, Colorado appeared to get a
key turnover on freshman J.J. Billingsley's interception and
15-yard return to the USC 38. The Buffs were penalized for roughing
the passer, however, and USC retained possession.

Three plays later, McCullough went 62 yards off the left side to
make it 20-0.

Colorado squandered its only other scoring opportunity in the
half after Roderick Sneed's 44-yard kickoff return. Two plays
later, Hodge was intercepted.

The Buffaloes blocked a punt early in the third quarter, but Pat
Brougham missed a 23-yard field goal.

Later in the period, Kareem Kelly fumbled while making a fair
catch on a punt, and Colorado recovered at the USC 19. Brougham
kicked a 42-yard field goal, cutting the deficit to 20-3.

The Trojans countered with another 80-yard drive. Palmer
completed 6-of-6 passes on the march, sneaking the final yard for a
27-3 lead early in the fourth quarter.

Moments later, Mariscal's punt was blocked by Forrest Mozart,
and the Trojans' Mike Ross recovered in the end zone to make it
33-3.

A fumble by Colvin set up Darryl Poston's 4-yard TD run in the
closing minutes.

Kelly caught a pass in his 37th straight game, tying the school
record set by John Jackson from 1986-89.