The Sooners (No. 3 ESPN/USA Today, No. 2 AP) got several big plays on both sides of the ball,
including two interception returns for touchdowns, in a 68-0
victory Saturday night that included a 51-minute weather delay. 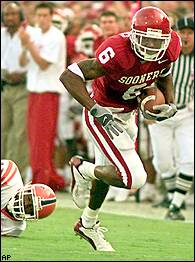 Nate Hybl threw for 278 yards and two touchdowns and Quentin
Griffin had 108 yards rushing and two TDs as Oklahoma (3-0) won by
its widest margin since a 73-3 victory over New Mexico State in
1989.

Play was stopped late in the first quarter with Oklahoma leading
14-0. After the break, which allowed thunderstorms to pass through,
the Sooners scored 24 second-quarter points and kept on rolling.

"That's what I said to the team -- I didn't care who we were
playing this week, the bottom line is we needed to execute, have
better concentration and play to our potential,'' coach Bob Stoops
said.

The Sooners were coming off a 37-27 victory over Alabama, a game
in which they had rally in the closing minutes to win. This one was
never in question against a UTEP team that lost 77-17 to Kentucky a
week ago.

"I thought the rain was going to help us out, slow them down a
bit,'' coach Gary Nord said. "But they are so talented and have so
much speed that we could not match up with them.

"I knew we were going to be in for a long night. The longer it
delayed, the longer it was going to take to get it over with.''

Hybl, the starter again due to a season-ending knee injury to
Jason White, threw a 56-yard scoring pass to Antwone Savage on the
second play of the game and didn't slow down much the rest of the
way. He finished 13-of-22 with no interceptions in 2½ quarters.

Hybl started 11 games a year ago, but lost his job two White for
two games midway through the season. He began this year as the
backup, then took over last week when White was hurt against
Alabama.

Hybl was rarely pressured and used his time in the pocket to
find receivers downfield. He had seven completions of 15 yards or
more, including the 56-yarder to Savage, a 32-yard TD pass to
Renaldo Works and a 54-yarder to Mark Clayton.

"I thought we had a real exciting, successful week of practice,
and we kept building every day,'' Hybl said.

He said offensive coordinator Chuck Long "said he felt
something coming on as far as our total offensive package and it
happened tonight.''

Oklahoma drove 80 yards in three plays for its fifth touchdown
of the half. Griffin carried for 16 yards, Hybl hit Brandon Jones
on a 35-yard completion, then Griffin scored on a 29-yard run.

Michael Hawkins had a 45-yard interception return in the fourth
quarter to help close out the victory.

The Miners' best scoring chance came in the first half when a
57-yard pass play from Jon Schaper to Terrance Minor put the ball
at Oklahoma's 25. An intentional-grounding penalty on the next play
killed the drive and they wound up punting.