STATE COLLEGE, Pa. (AP) -- After two years of losing records, Joe
Paterno and Penn State are back in a big way. 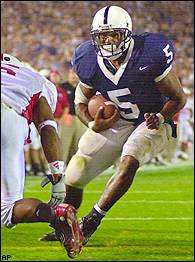 Larry Johnson and Michael Robinson had two touchdown runs apiece
and Rich Gardner turned his first career interception into a
touchdown as the No. 25 Nittany Lions routed Nebraska (No. 7 ESPN/USA Today, No. 8 AP) 40-7 Saturday
night.

Penn State had two lean seasons after that, going 5-6 and then
5-7 -- Paterno's first consecutive losing records in his long
career. But with this one victory, the Nittany Lions showed their
75-year-old coach how much they have improved.

"I think this put's us right back on the map and opened a lot
of eyes,'' said Bryant Johnson, who had eight receptions for 147
yards.

Penn State (2-0) dominated the third quarter, eating away 7:10
before Robinson's 8-yard touchdown gave the Nittany Lions a 19-7
lead. Mills faked the handoff to Sean McHugh, then gave it to
Robinson -- the backup quarterback -- on the end-around.

"I'm not the smartest guy in the world, but I'm smart enough to
know when you've got a kid like Robinson, you put him in the
game,'' Paterno said.

Gardner intercepted Jammal Lord's pass, intended for Ben
Cornelson, and returned it 44 yards for a touchdown to make it
26-7. Nebraska tackle Richie Incognito and Penn State end Jeremiah
Davis were ejected after the play for unsportsmanlike conduct.

After holding Nebraska (3-1) to three and out, Penn State got
the ball on its own 45. Larry Johnson took the first play 35 yards
up the middle, and Robinson -- lined up now at tailback -- ran for 9
yards, then an 11-yard touchdown to give the Nittany Lions a 33-7
lead with 2:15 left in the third quarter.

"He's a great athlete,'' quarterback Zack Mills said. "We're
trying to get him in the game, get him some touches.''

Things only got worse for the Cornhuskers in the fourth quarter,
when Lord threw his second interception to Lavon Chisley. A
personal foul on Nebraska after the play gave Penn State the ball
on its own 39.

"In the second half, they put points on the board, and it just
kind of snowballed,'' Nebraska coach Frank Solich said. "It did
seem we played the game with greatly diminished energy as we fell
behind.''

Larry Johnson ran the ball six times in the possession,
including a 2-yard sweep around the right side for the score and a
40-7 lead.

Robbie Gould kicked field goals of 20 and 34 yards in the second
quarter to give Penn State a 13-7 lead at halftime.

"I just played terrible,'' Lord said. "I hurt the team more
than I helped them.''

Larry Johnson made a catch in the flat, then went 21 yards to
set up the game's first score. Two plays later, he took an option
pitch at the 7-yard line and broke two tackles going into the end
zone, putting the Nittany Lions up 7-0 early in the second quarter.