AUBURN, Ala. (AP) -- Carnell "Cadillac" Williams ran for a career-high 202 yards, and his 8-yard touchdown run in the third overtime gave Auburn a 37-34 victory over Syracuse on Saturday night. 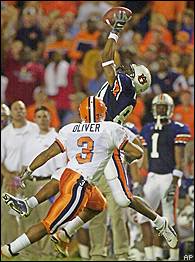 Williams, scored on a 6-yard run in the second overtime, and his 40 carries were the second-most in Auburn history, behind only the 41 he had in a win over Georgia last November. Syracuse's Walter Reyes sent the game to the third OT period with a 2-yard TD run.

Auburn (4-1) held Syracuse (1-3) to a 44-yard field goal by Collin Barber to open the third extra period, and the Tigers moved the ball steadily on their possession.

The game was tied at 24 after regulation play, and both teams botched field-goal attempts in the first overtime.

After the Tigers kept Syracuse out of the end zone in the third
OT, backup quarterback Jason Campbell hit Lorenzo Diamond for an
11-yard pass, then handed off three straight times to Williams.

The stands remained nearly packed after the game as the Tigers left the field to a standing ovation.

Carlos Rogers had two third-quarter interceptions for the Tigers, who trailed 17-3 at halftime despite five trips across midfield against the nation's 114th-ranked defense.

The Orangemen didn't get a first down for the first 19 minutes of the second half. They fell to 0-3 against Division I-A opponents this season.

Auburn took its first lead when fullback Brandon Johnson, who hadn't caught a pass all season, slipped uncovered into the secondary for a 34-yard touchdown catch from Campbell with 7:10 left.

Damon Duval had to kick the extra point twice because of a false-start penalty, and the point proved crucial.

Campbell had a 1-yard touchdown run in the third quarter and threw a pair of second-half TDs. He replaced Daniel Cobb, who sprained an ankle late in the opening half.

Syracuse starter R.J. Anderson was 5-of-18 for 67 yards and had three passes intercepted.

The Orangemen, who were two-touchdown underdogs, scored on an 85-yard punt return by Jamel Riddle and on Reyes' 68-yard run in the first half.

It was the second time in three meetings that the teams have ended regulation tied, including a 16-16 final in the 1988 Sugar Bowl.