AMES, Iowa (AP) -- There's a new Big Red to deal with in the Big
12 North, where Iowa State suddenly has eclipsed Nebraska.

Seneca Wallace ran for two touchdowns and threw for another as
the 19th-ranked Cyclones (No. 21 ESPN/USA Today, No. 19 AP) signaled a shift of power in the
conference by rolling to a 36-14 win over Nebraska (No. 19 ESPN/USA Today, No. 20 AP) on Saturday. 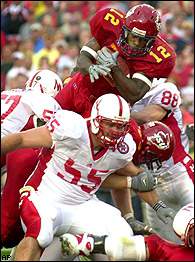 "I was ready for this one like never before,'' said Iowa
State's Michael Wagner, who rushed for 107 yards in 19 carries.
"This was time to shock the world. I guess we did it.''

"Going into it, I expected victory,'' Danielsen said. "I felt
like we were a better team. There was never a point in the game
when I felt we were going to lose the game.''

Nebraska center John Garrison felt the exact opposite way,
predicting a victory during the week.

"I made that comment because of the confidence I had in this
team,'' he said. "It's not the performance I pictured.''

The loss came two weeks after a numbing 40-7 setback to Penn
State and is sure to turn up the heat on fifth-year Nebraska coach
Frank Solich, whose team committed five turnovers in losing for the
fourth time in the last seven games. All four losses have come on
the road.

The Cornhuskers also could fall out of the AP Top 25 for the
first time since 1981, ending a run of 348 straight appearances.

"We'll either splinter apart or come together,'' Solich said.
"There's no middle ground.''

Iowa State beat a ranked team for the first time since 1993 and
is poised to make a run for the Big 12 North championship. The
22-point margin was the Cyclones' largest against Nebraska since a
34-0 win in 1899.

Thousands of red-clad Iowa State fans ran onto the field when
the game ended, with many climbing the goal posts. Coach Dan
McCarney was caught in the middle.

"I got a fat lip out of that,'' McCarney said with a smile. "I
don't think somebody hit me on purpose. That can get a little
dangerous, but I'll try to fight my way out of that danger any
time.''

The Cyclones scored 17 points off turnovers and dominated the
game in every area. They outgained Nebraska 412-273 and held the
Cornhuskers to 81 yards rushing. Nebraska had averaged 411 yards
rushing in its previous nine games against Iowa State.

It was the first time Nebraska had been held below 100 yards
rushing since getting 73 against Oklahoma State in 1998.

"We were just flying to the football and getting 11 guys to the
ball,'' said Iowa State nose tackle Nick Leaders, a freshman from
Omaha, Neb. "I'm excited to be a part of this. All those years I
was growing up, we never beat them.''

Nebraska did not run a play in Iowa State territory until less
than 10 minutes remained.

By that time, Mike Stuntz had replaced an ineffective Jammal
Lord at quarterback. Lord's only highlight was a 90-yard touchdown
pass to Ross Pilkington in the second quarter.

Wallace scored on runs of 1 and 7 yards, and he hit Lane
Danielsen for a 3-yard touchdown pass. Wallace finished 19-of-32
for 220 yards and two interceptions.

Danielsen's touchdown gave Iowa State a 19-7 halftime lead, and
the Cyclones put it out of reach with an 80-yard drive to start the
second half. Wallace scored from the 1 after a shove from fullback
Joe Woodley.

"That was one of the main things, we wanted to get ahead
early,'' Wallace said. "We didn't want to get in a hole, because
that's what they feed off of. We wanted to make sure we scored
first.''

Nebraska trailed 10-0 but tried to rally on Lord's long
touchdown pass to Pilkington, a 21-year-old freshman who played two
years of minor league baseball. He got 10 yards behind the coverage
when he caught Lord's pass at midfield and easily outran the
pursuit. It was the third-longest pass play in Nebraska history and
the longest since a 95-yarder in 1965.

By the time Nebraska scored again, after blocking a punt and
getting the ball on the Iowa State 2-yard line, the Cyclones led
26-7.

"It's frustrating right now,'' defensive end Chris Kelsay said.
"I really don't have a lot of answers. Right now, nobody does.''

Penalties combined with the turnovers to frustrate the
Cornhuskers. They were penalized eight times in the first half and
two others were declined. A second-half holding penalty nullified a
78-yard kickoff return by Josh Davis.

However, it happened, Iowa State will take it. A victory like
this has been a long time coming.

"We've come a long ways, we've got a long ways to go,''
McCarney said. "If we want to take it to the next level, if we
want to be special, if we want to make this a memorable season,
these are the games we've got to start winning.''