DALLAS (AP) -- Just as the Red River shootout started to slip
away from the Oklahoma Sooners, Quentin Griffin ran to the rescue --
and all over the Texas Longhorns. 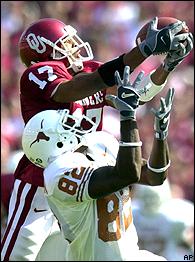 Griffin scooped up a loose ball and scored the go-ahead
touchdown, ran 17 yards for the game-clinching score with 3:02 left
and finished with a career-high 248 yards to carry the Sooners (No. 3 ESPN/USA Today, No. 2 AP) to a 35-24 victory over the Longhorns (No. 2 ESPN/USA Today, No. 3 AP) on Saturday.

"Quentin had an incredible day. I think he really likes to play
Texas,'' Oklahoma coach Bob Stoops said, referring to Griffin's
six-TD day against the Longhorns in 2000.

Oklahoma (6-0, 2-0 Big 12) beat its Red River rival for the
third straight time, but this one was the toughest yet.

The Sooners trailed by 11 in the second quarter and were behind
at halftime for the first time since the 1999 Independence Bowl,
but they rallied with 24 unanswered points.

"I knew if we kept executing, something would give,'' Sooners
tight end Trent Smith said. "This is what we prepared for all week
long. We had the confidence.''

Texas (5-1, 1-1) got its first three scores, and a 17-11 lead,
by making the most of Nate Hybl's interceptions. Otherwise, the
Longhorns couldn't do much.

Coach Mack Brown fell to 2-7 against top-10 teams, and
quarterback Chris Simms lost his fourth straight. Simms was
12-of-26 for 156 yards with three interceptions and four sacks,
including one on the game's final play. He's committed 15 turnovers
in games against top-10 teams.

"It has nothing to do with Chris and I; it's about the team,''
Brown said. "Any time you lost to OU, it's disappointing.''

What hurt the Longhorns more than Simms' interceptions was his
inability to get the offense going in the second half.

Texas got a first down on its second play of the third quarter,
then didn't get another until there was 2:43 left. In between, the
Longhorns went from being ahead 14-11 to trailing 35-17.

Hybl threw a third-and-goal pass from the 6 to Will Peoples in
the right flat. Linebacker Reed Boyd forced the ball out just shy
of the goal line, but Griffin was right there. He scooped it up and
walked in for an easy touchdown that put OU ahead for the first
time, 21-17, early in the fourth quarter.

The Sooners scored again on their next possession, getting a
3-yard TD run by Kejuan Jones after Hybl and Peoples connected on
another clutch play.

Then it was back to Griffin. On OU's next drive, he carried on
all four plays for 59 yards, capped by his 17-yarder that made it
35-17. When the Longhorns got the ball back, Sooners fans greeted
them with chants of "Over-rated.''

Griffin, who had a school-record six TDs in OU's 63-14 victory
two years ago, was wonderful from the start. He ran nine times for
117 yards in the first quarter against a Texas defense that hadn't
allowed a 100-yard runner all season.

He was held to 29 yards in the middle two quarters, then had 102
in the final period.

His success should've made things easier for Hybl, but the
senior struggled.

Simms scored on a 1-yard plunge following Hybl's first
interception, and the second was returned 73 yards by Rod Babers
for a 14-3 Texas lead.

The Sooners looked likely to go into halftime trailing by that
margin, but Antwone Savage returned a kickoff 81 yards to the Texas
16. The Longhorns helped keep OU's drive alive with a false start
on fourth-and-2, then Hybl threw a 3-yard touchdown pass to Trent
Smith. Hybl then lobbed a 2-point conversion pass to Curtis Fagan
to make it 14-11.

Hybl again proved to be Texas' best offensive weapon as his
third interception put the Longhorns on the Oklahoma 21. They
settled for a 36-yard field goal by Dusty Mangum to go up 17-11. A
37-yard field goal by DiCarlo got the Sooners back within three. He
also had a 29-yarder in the first half.

Simms scored Texas' final touchdown on another 1-yard dive, but
it was too little, too late.