The Oklahoma quarterback found it more amusing than painful. 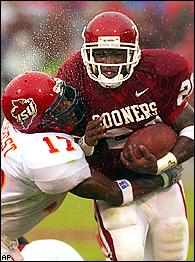 "Sorry my nose is a little swollen,'' said Hybl, who had taken
a hit from an Iowa State defender. "I feel like Rudolph.''

That was about the only blemish on the performance of Hybl and
the second-ranked Sooners, who delivered a brutal blow of reality
to Iowa State (No. 13 ESPN/USA Today, No. 9 AP) in beating the Cyclones 49-3 Saturday.

Quentin Griffin and Kejuan Jones each ran for two touchdowns and
Oklahoma dealt a setback to Seneca Wallace's Heisman Trophy hopes
with an overwhelming effort on defense.

Iowa State (6-2, 3-1), in the top 10 for the first time, had
been enjoying a dream season until running into a quick, swarming
Oklahoma defense that frustrated the Cyclones at every turn on a
dreary, rainy afternoon.

A victory would have vaulted the upstart Cyclones into the
national championship picture. Instead, they fell to 1-35-1 against
Oklahoma since 1962 and are now 0-47-2 against teams ranked in the
top 5.

Oklahoma set the tone by blocking a punt for a touchdown on the
game's fourth play and kept Wallace from making the kind of big
plays that had sparked the Cyclones all season. The Sooners were so
tough to crack that Iowa State couldn't score after recovering a
fumble at the Sooners' 1-yard line late in the first half.

"We just got on him from the first play of game to the last
play,'' Oklahoma linebacker Teddy Lehman. "We made it a point to
not let him make any highlight runs on us.''

Wallace, who had emerged as a leading contender for the Heisman
with his sharp passing and elusive running, had trouble with the
wet football, bouncing throws short of his receivers and
overthrowing them on other plays.

Though he often had plenty of time to throw, Wallace didn't
complete his second pass until the 13:00 mark in the third quarter
and finished 4-of-22 for 43 yards and three interceptions.

In a miserable first half, Wallace was 1-for-12 for zero yards
and two interceptions. Those numbers won't help his Heisman hopes.
Wallace said he didn't care.

Iowa State wound up with 60 total yards, the fourth lowest total
in school history and the fewest since getting 53 in a 44-0 loss to
Nebraska in 1984.

With Wallace and the offense struggling, Oklahoma had excellent
field position and took advantage. Hybl bounced back from his four
interceptions against Texas a week ago with a solid performance and
Griffin and Jones wore down the Cyclones with their power running.

"We just may be hitting our stride at the right time,''
Oklahoma coach Bob Stoops said. "I hope that's the case. I know we
have a lot of confidence right now.''

Griffin carried 23 times for 111 yards and scored on first-half
runs of 15 and 4 yards. On his first touchdown, the 5-foot-7 senior
squirted out of a mass of bodies in the middle the field, slipped
Ellis Hobbs' attempted tackle at the 7 and dove into the end zone
to make it 14-0.

Jones added 86 yards on 25 carries and scored on a pair of
1-yard runs. Hybl was 14-of-24 for 168 yards with no interceptions
and a 22-yard touchdown toss to Brandon Jones, who made a leaping
catch between two defenders at the goal line for a 42-3 lead.

Things went so well for Oklahoma -- and so badly for Iowa State --
that when Derrick Strait fumbled after making a leaping
interception off Wallace, teammate Tommie Harris recovered at the
Iowa State 20.

Four plays later, after Griffin broke three tackles on a 13-yard
run, Jones bulled in from the 1 to make it 35-0 with 7:11 left in
the half.

"Looking at the stat sheet, it just looks like total domination
by our defense,'' Hybl said. "But I don't want to understate how
well our offense played today. We executed about every facet.''

Strait set up Oklahoma's first touchdown when he raced in from
the left side to block Tony Yelk's punt less than minute into the
game. The ball rolled into the end zone and was on its end spinning
when Iowa State's Anthony Forrest ran toward it.

But instead of kicking it out of the end zone or falling on it
for a safety, he ran right past it and Oklahoma's Terrance Sims
dove on the ball for a touchdown.

"I should have just fell on the ball,'' Forrest said. "I
thought about batting it out of the end zone, but I didn't know how
close the defense was pursuing me.''

The play touched off an early celebration by the Sooners. There
would be many more.

"It was an incredible defensive game against a tremendous
player,'' Stoops said. "We still believe Seneca Wallace is a guy
who deserves all of the Heisman attention he has gotten. We
approached this game as we needed to play at our level best to do
the best we could.''