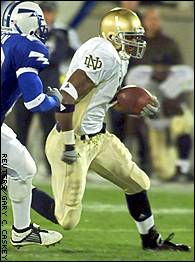 Notre Dame (7-0) won its first six games despite an offense that
was among the nation's worst. The Irish won this battle between two
of college football's biggest surprises by taking advantage of
their size up front -- up to 60 pounds heavier than Air Force's line -- to produce a season-high 447 total yards.

"I think our offensive line, our backs, our entire offensive
team did an excellent job of execution," said Tyrone Willingham,
who joined Jesse Harper (1913-14) and Ara Parseghian (1964) as the
only Notre Dame coaches to win their first seven games.

"We eliminated a lot of the mistakes we've had in previous
weeks."

Air Force (6-1), playing in front of a record crowd of 56,409,
couldn't keep Notre Dame's defenders out of the backfield and
wasn't able to get around the speedy Irish on the outside.

The 15th-ranked Falcons finished with just 104 yards rushing,
235 below their average.

"They didn't surprise with anything particularly they did. They
just executed very well," Air Force coach Fisher DeBerry said.

"It seemed like tonight we were just a step, maybe an inch or
two, from making a play."

The Irish did it by focusing on Chance Harridge. The diminutive
Air Force quarterback had been elusive during Air Force's first six
games, running for 615 yards and 15 touchdowns -- tied for most in
the nation.

Notre Dame consistently had two players in Harridge's face
immediately after he made the first fake on the option. The Irish
also kept the running backs from reaching the corner on the
outside.

Harridge finished with just 31 yards on 13 carries. He also was
just 6-for-14 passing for 57 yards, and he had a pass intercepted by
Shane Walton in the third quarter. It was Walton's sixth pick of
the season.

Notre Dame dominated most of the way, totaling 199 more yards
than Air Force in the first half. But the Irish allowed the Falcons
to stay in it with three fumbles and two missed field goals by
Nicholas Setta.

Carlyle Holiday fumbled on Notre Dame's first drive when he was
sacked by Cameron Hodge, then he put the ball on the ground again
when he was blindsided by Jon Hicks on a run up the middle.

Air Force didn't capitalize on the first fumble, but Marchello
Graddy returned the second one 21 yards for the game's first score.

Notre Dame led 14-7 at halftime on touchdown runs by Holiday and
Grant, but Air Force quickly tied it after Sean Rodgers stripped
Vontez Duff on the second-half kickoff. Kenny Smith recovered at
the Notre Dame 16, and Harridge scored six plays later on a 1-yard
sneak.

Setta pushed a 41-yard attempt wide right in the second quarter,
and he missed to the left on a 36-yarder in the third.

Still, Willingham said he didn't think the turnovers had much of
an effect.

"The mistakes that cause turnovers, I don't think they bothered
our guys one bit," said Willingham, whose team is off to its best
start since opening the 1993 season with 10 consecutive victories.

Notre Dame took a 21-14 lead midway through the third on a
1-yard sneak by Holiday, his second touchdown of the game. He also
scored on a 53-yard run after being flushed from the pocket.

Air Force had just 57 yards rushing on 23 carries in the first
half.

Offensively, the Irish easily sealed off the smaller Falcons at
the line of scrimmage, giving Grant up to 4 and 5 yards of cushion
before he reached any tacklers.

Grant had 129 yards on 15 carries in the first half, and he
scored on an 18-yard run late in the second quarter through a huge
hole up the middle.