BOULDER, Colo. (AP) -- Colorado has earned a chance to defend its Big 12 title. 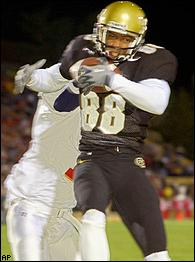 Bobby Purify ran for 174 yards and a touchdown as the
17th-ranked Buffaloes clinched Big 12 North title with a 41-27 win
over Iowa State on Saturday night.

Purify scored on a 5-yard touchdown run with 1:43 remaining to
seal the win.

Colorado will meet the winner of next week's Texas Tech-Oklahoma
game in the Big 12 championship Dec. 7 in Houston.

The Buffaloes managed to hold off Iowa State (7-5, 4-4) despite
losing Chris Brown in the third quarter. Brown, the nation's
leading rusher, departed with a bruised sternum after running for
127 yards and a touchdown on 25 carries.

To claim the division title, Colorado needed a win over either
Iowa State or Nebraska, whom the Buffs play in Lincoln on Neb. 29.

"We didn't want to leave it up to going to Lincoln,'' offensive
guard Wayne Lucier said. "We said all along, `Let's end it this
week.' ''

Robert Hodge's second touchdown pass of the game, a 6-yarder to
a diving Derek McCoy, put the Buffs ahead 27-20 with 10:20
remaining.

With 6:02 to go, Colorado's Marcus Houston, playing for the
first time since injuring his knee in the season opener, fumbled,
and Iowa State linebacker Brandon Brown recovered at the Colorado
25.

Two plays later, however, Cyclones quarterback Seneca Wallace,
in the shotgun formation, fumbled the snap. Moore scooped it up and
ran it back for the score and a seemingly comfortable 34-20 lead.

Iowa State countered with a touchdown just 1:16 later as Wallace
completed all four of his passes for 64 yards and ran the final 6
yards himself for the score, cutting the deficit to 34-27.

Purify, who got the bulk of the carries after Brown left the
game, responded by carrying all six times on a six-play, 80-yard
scoring drive. His 50-yard run down the left sideline set up his
score four plays later.

"Medford's fumble return was huge,'' Colorado coach Gary
Barnett said. "Then they come right back down and score. And then
Bobby almost takes it back down there himself on that 50-yard
run.''

Hodge said Purify "doesn't get the carries that Chris gets, so
people don't see how great a player he can be. When this team
needed him, he stepped up and played great.''

Iowa State coach Dan McCarney said Brown and Purify "are two
great backs. I don't see many teams in the country that Purify
couldn't start for. In the end, I think they just wore us out.
Colorado's rush game in the fourth quarter was the difference.

"I want my team to learn from today and know that we've closed
the gap immensely in this league, but know that we've got a ways to
go if we're going to be out there celebrating a Big 12 North
championship.''

Brown had runs of 22 and 21 yards, and Purify had a 22-yarder
late in the first quarter on a drive that culminated in Hodge's
8-yard scoring pass to D.J. Hackett for a 10-7 lead.

Colorado squandered a prime scoring opportunity moments later.
Wallace fumbled when he was sacked by Donald Strickland, and
Colorado's DeAndre Fluellen recovered at the 11-yard line. But
after two running plays and an incomplete pass, Pat Brougham
attempted a 25-yard field goal, which clanged off the right
upright.

Lance Young, who earlier in the quarter had dropped an apparent
touchdown pass, caught Wallace's 50-yarder for a touchdown to put
the Cyclones back ahead 14-10.

The Cyclones then drove to the Colorado 21, but Wallace's pass
was intercepted at the goal line by Phil Jackson.

After a quick exchange of turnovers early in the third quarter,
Iowa State went ahead 20-17 on Joe Woodley's 1-yard run. JaMaine
Billups' 39-yard fumble return helped set up the score, but the
extra-point attempt was blocked.

Colorado responded with a 40-yard field goal by Brougham. On
that drive, Brown was injured.