LUBBOCK, Texas (AP) -- Texas had no answer for Kliff Kingsbury,
and now there's no chance for a Big 12 or national title. 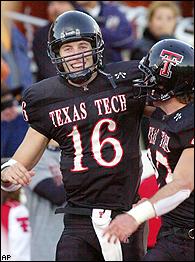 Kingsbury threw for 473 yards and six touchdowns against one of
the nation's top defenses and Texas Tech earned a 42-38 upset of the Longhorns (No. 3 ESPN/USA Today, No. 4 AP) on Saturday.

"We tried everything and he whipped everything we tried,''
Texas coach Mack Brown said. "We're really disappointed, but give
them credit.''

Texas fell eight spots to No. 11 in the coaches' poll, which was released Sunday morning.

The Red Raiders visit co-No. 4 Oklahoma (9-1, 5-1) next
Saturday, with the winner taking the division and advancing to the
Big 12 title game on Dec. 7.

"We just have to do the same like we did today'' to beat
Oklahoma, Tech coach Mike Leach said. "We need to get a lot of
first downs, make good punts and complete passes.''

The defeat was another tough blow for Texas (9-2, 5-2) and coach
Mack Brown. A loss to Oklahoma last month all but eliminated the
Longhorns from the conference race, but they still had an outside
chance of reaching the BCS' national title game in the Fiesta Bowl
on Jan. 3.

"They all hurt anytime you lose,'' said Texas quarterback Chris
Simms, who threw for 345 yards and four TD passes. "This one hurts
a lot. To be so close and have things fall the way they did, it's
tough.''

Simms tried to lead Texas back, but Texas Tech safety Ryan
Aycock intercepted a pass intended for B.J. Johnson with 5:21
remaining to seal the win.

"I was just trying to go in the middle, and I got bumped by a
linebacker,'' Johnson said. "By the time I got turned around in
there, Chris had already thrown the ball. The rest is history.''

With no timeouts left for Texas, Tech kept the ball on the
ground and got three first downs to run out the clock.

Texas is the highest-ranked team Tech has ever beaten.

Although Texas' defense came into the game ranked fifth
nationally, allowing just 261 yards per game, Texas Tech had 306
yards by halftime and finished with 606.

"We played hard, but we didn't quite do it,'' Reese said. "We
were up against a hot quarterback, and my hat's off to him.''

With the score tied at 21-all at the half, Kingsbury opened the
third quarter with eight straight completions, including a 5-yard
TD pass to Wes Welker, who had 247 all-purpose yards.

"We have so many weapons you just try to make plays you can,''
Welker said.

After his big day, Kingsbury, who completed 38 of 60 passes,
moved up to the No. 4 passer in Division I history with 11,831
yards, passing Todd Santos of San Diego State.

Texas took a 7-0 lead when Cedric Benson scored from 2 yards out
just two plays after Kingsbury fumbled on Tech's first play from
scrimmage.

"We dug a hole for ourselves with the fumble in the first
quarter,'' Leach said. "But the team did a good job settling down,
regaining their composure and getting back into the game.''

After a Tech punt forced Texas to start at its 10, Simms led the
'Horns on a 12-play drive, finding Roy Williams alone in the end
zone to give Texas a 14-0 lead. Texas kept the drive alive on a
fake punt.

Tech, averaging just over 38 points before the game, failed to
score in the first quarter for the first time since its opening
game 45-21 loss to Ohio State.

But the Red Raiders came back in the second quarter to tie it at
14-all with touchdown passes from Kingsbury of 23 and 15 yards in
the first five minutes.

Williams said he was "pretty shocked.''

"Kingsbury did a great job of picking our defense apart,'' said
Williams, who had eight catches for 117 yards. "Any time we
scored, they responded. They played a great game and did the things
they had to.''

Tech got the ball back on its own 14 with 1:01 left in the half
and no time outs. That didn't stop Kingsbury, who threw a 62-yard
TD pass to Nehemiah Glover.