NEW ORLEANS (AP) -- Cincinnati's Gino Guidugli was the headliner coming into the New Orleans Bowl, but the North Texas defense stole the show. 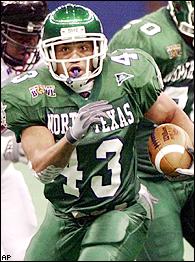 "They had a good scheme, and I messed up a lot,'' Guidugli said. "They rushed three and got good pressure while dropping eight (into coverage), and I forced too many balls.''

Kevin Galbreath ran for 130 yards, including a 35-yard touchdown, and Jeremy Pearl scored on a 20-yard interception return for North Texas (8-5), which finished the season on a seven-game winning streak. The Mean Green won their first game against a Division I-A team outside of the Sun Belt Conference.

"It means a lot, because people don't have respect for us,'' Pearl said. "If we can't get our respect now, I don't know when we can.''

"We've got a lot of good teams in our league, and this win shows we're capable of being a Division I-A league,'' North Texas coach Darrell Dickey said.

Andrew Smith completed 9 of 22 passes for 126 yards, but North Texas gained 192 yards on the ground to control the game. Galbreath also had a 19-yard first-down run in the last two minutes that allowed North Texas to run out the clock without giving the dangerous Guidugli another shot.

"Our offense made enough plays for us to win the game,'' Dickey said. "We were able to run the ball, even when they had the middle stacked.''

Guidugli, who came in averaging 255 yards passing, was 19-of-34 for 224 yards and a touchdown. He had been intercepted 16 times in 13 games before throwing five Tuesday night.

Jon Olinger caught four passes for 107 yards to set a Cincinnati single-season receiving mark with 1,114 yards. Jim O'Brien set the old record of 1,107 in 1968. Olinger's 27-yard catch over the middle set up Cincinnati's first touchdown, and his 55-yard grab set up a field goal in the third quarter.

After Guidugli's fifth interception, North Texas moved into Cincinnati territory and appeared primed to open the game up. But Zach Norton intercepted a sideline pass and ran it back for what would have been a touchdown had not Willis Edwards been called for an illegal block 20 yards behind the play.

North Texas held Cincinnati to a 29-yard field goal by Jonathan
Ruffin, and Cincinnati's next drive also stalled inside the 20,
forcing the Bearcats to settle for a 33-yard field goal that left
the score 24-13 with 5:02 remaining in the third quarter.

The North Texas defense stopped Cincinnati on its next two
drives, but the Bearcats scored when Franklin Callicott stripped
Patrick Cobbs of the ball at the North Texas 43 and ran it all the
way back with 5:15 left in the game.

Guidugli was intercepted four times in the first half, and North
Texas converted three of them into 17 points. But Cincinnati
defensive end Antwan Peak blamed two of the scored on the defense.

"I don't put any blame on Gino. He was just trying to make plays,'' Peak said. "Just because we turn it over doesn't mean we should let them score.''

The second and third interceptions, both in North Texas territory, started North Texas drives that ended with a 30-yard field goal by Nick Bazaldua and a 27-yard scoring run off tackle by Cobbs.

Guidugli's fourth interception came as he was pressured while throwing from the end zone. It went straight to Pearl, who easily ran it back to give North Texas a 17-7 lead at halftime.

Cincinnati's only offensive touchdown came on a 6-yard pass from Guidugli to Tye Keith, giving the Bearcats a 7-0 lead in the first quarter.