DETROIT (AP) -- Boston College played like a team on a mission. 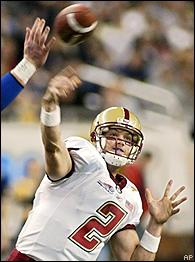 Brian St. Pierre led the Eagles to touchdowns on their first six possessions and Boston College beat Toledo 51-25 in the Motor City Bowl on Thursday night.

"I think we came out wanting to earn respect,'' coach Tom O'Brien said. "We wanted to be here, and we wanted to prove how good we were.''

St. Pierre, the game's most valuable player, completed 25 of 35
passes for a career-high 342 yards and three touchdowns as Boston College capped one of the most successful four-year runs in school history.

The Eagles' senior class, which includes St. Pierre, won its
32nd game, tying the 1981-84 group for the most wins in a four-year
span in the past 60 years.

Boston College became the ninth team in school history to win at
least nine games and the first since 1993.

Boston College appeared in a bowl game for a fourth consecutive
season. The Eagles, who are 32-17 over that span, finished the
season with four straight wins.

"After everything that's happened in the past four years, this is a storybook ending,'' St. Pierre said. "When I first got here, I would have never believed that we could go to four straight bowls and win the last three.''

Toledo (9-5) wasn't able to take advantage of a partisan crowd at Detroit's new Ford Field, which is located about an hour north of the Rockets' campus. The bowl's previous five games were played at the Silverdome in suburban Pontiac.

Boston College faced the challenge of the Rockets' unpredictable spread offense, but it was the Eagles who dominated with a more traditional approach.

"They won the battles in the trenches on both sides of the ball, and that's what won them the game,'' Toledo coach Tom Amstutz said. "They were very physical, and we weren't able to match that.''

The Eagles set a Motor City Bowl record for most points. The previous record was set in Marshall's 48-29 win over Louisville in 1998. It was the most points the Eagles scored since a 55-3 win over Connecticut on Oct. 7, 2000.

Toledo scored the lone touchdown of the second half when Brian
Jones connected with Manny Johnson on a 30-yard score with 25
seconds remaining in the third quarter to make it 48-25.

Carl Ford caught 10 passes for 112 yards, including a 9-yard
touchdown pass with 24 seconds to go in the second quarter.

"I don't feel like they dominated us, but they got a quick lead
and took us out of our game plan,'' Jones said. "It's hard to win
a game when you can't play the type of offense you want.''

Down 28-10 with less than six minutes to go in the first half, Toledo gambled, going for it on a fourth-and-1 from its own 40, but Jones' pass fell incomplete.

Boston College took possession, and on the next play, Grant
Adams caught St. Pierre's pass across the middle, eluded a defender
and raced into the end zone for a 35-10 lead.

Toledo left tackle Nick Kaczur was ejected near the end of the first half for twice punching Boston College defensive end Phil Mettling during a scrum after a 2-point conversion by the Rockets made it 42-18.

As a result, the teams were not allowed to go into the tunnel together at halftime. Officials halted the Rockets near the end zone as Boston College's players made their way into the locker room.

A second Toledo player, defensive back Brock Dodrill, was ejected early in the third quarter when he hit St. Pierre out of bounds.

"That's not something we like in college football, but I thought the Big 12 officiating crew did a great job,'' O'Brien said. "They told us at halftime that they were going to call it close and throw people out if they had to.''

Toledo, coming off a 49-45 loss to Marshall in the MAC championship game, failed to defend its Motor City Bowl title from a season ago. MAC teams had won the previous four Motor City Bowl games.

Toledo cut the Eagles' advantage to 21-10 when Trinity Dawson scored on a 2-yard run with 10:47 remaining in the first half.

Boston College made it 21-3 a minute into the second period when
St. Pierre delivered a third-and-8 pass to Joel Hazard, who made a
defender miss along the sideline, cut up field and dove into the
end zone for a 40-yard score.

On their second possession, the Eagles passed on seven of nine plays and took a 14-0 lead on St. Pierre's 17-yard pass to Adams.