CHARLOTTE, N.C. -- Wali Lundy spent most of his life chasing
Avon Cobourne. In their first head-to-head meeting, he finally
passed him. 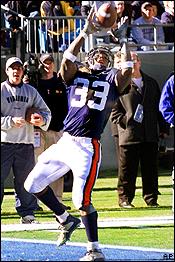 Lundy scored four touchdowns and gained 239 all-purpose yards as
Virginia snapped a four-game bowl losing streak Saturday with a
48-22 victory over No. 15 West Virginia in the inaugural
Continental Tire Bowl.

Cobourne, who was four years ahead of Lundy at Holy Cross High
School in southern New Jersey, ran for 117 yards and two touchdowns
for West Virginia.

Before he could finish talking about his days following
Cobourne, Virginia coach Al Groh interrupted his star freshman.

"I don't think this guy needs to measure himself against
anybody,'' Groh said. "He's going to be a big-time player.''

Lundy, who came in averaging 53.8 yards rushing and 27.6
receiving, ran for 127 and caught five passes for 76 yards. He
scored touchdowns on runs of 4 and 31 yards. He caught a 14-yard TD
pass from Marques Hagans and a 48-yard TD pass from Matt Schaub.

He said Cobourne had little to say to him after the game.

"He just said 'Good game,''' Lundy said. "You don't really
want to talk to another player after a game like that.''

"He played well. I mean, he represented,'' Cobourne said.
"He's got the talent, he started as a freshman, so I knew he had
it in him. I was hoping he wouldn't unleash it today.''

Schaub, the ACC player of the year, threw for 182 yards and a
score and Hagans returned a punt 69 yards for his second touchdown
as the Cavaliers (9-5) won their first postseason game since the
1995 Peach Bowl.

Virginia did an excellent job slowing down Cobourne, the Big
East's all-time leading rusher, who came into the game averaging
141 yards a game.

He ran for 54 in the first quarter and scored on a 6-yard run
but didn't gain a single yard in the second quarter. He finished
with 117 yards -- the 28th 100-yard game of his career.

Cobourne added a 1-yard touchdown in the fourth quarter, but a
2-point conversion attempt by the Mountaineers (9-4) failed, and
the TD only cut the score to 41-22 with 7:17 to play.

Cobourne ended his career with 5,039 yards, ninth-best in NCAA
Division I-A history. But it was the bowl win he most wanted,
especially a convincing victory, to prove that the Mountaineers
deserved to be in a bigger bowl. They were passed over for the
Gator Bowl despite finishing second in the Big East when officials
took Notre Dame instead.

"It sure was a bad way to end a good year,'' said West Virginia
coach Rich Rodriguez, who turned the Mountaineers around from a 3-8
record last season.

"There's some players hurting in the locker room, because
that's not the way we were playing football at the end of the
season.''

The Cavaliers also felt slighted at being in the Tire Bowl. They
finished second in their conference and felt they deserved a berth
in a New Year's Day game.

The initial disappointment wore off when fans from both schools
snapped up the 73,535 tickets -- painting Ericsson Stadium in a sea
of blue-and-gold West Virginia fans and orange-and-blue Cavs
supporters.

But Virginia, which quietly went about its business all week,
felt a second slight by the Mountaineers' confidence, and rumors
that West Virginia players had guaranteed a victory.

"I don't think they took us seriously,'' Schaub said.
"Everybody is entitled to their own opinion, but we knew what we
had and what we could do. In the end, we were the ones who
executed, not them.''