SEATTLE (AP) -- For his last game at Wake Forest, James
MacPherson was grateful that the game plan called for a bit more
passing than usual.

MacPherson completed 9 of 16 passes for a season-high 241 yards
and two touchdowns as the normally grounded Demon Deacons beat
Oregon 38-17 on Monday in the Seattle Bowl. 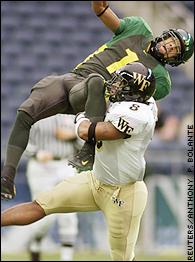 "Going into the game, I knew there were going to be
opportunities to throw a couple of deep passes on them, and maybe
score a few touchdowns,'' the senior said. "Luckily, we were able
to do that.''

MacPherson, who also ran for a score, hit Jason Anderson with TD
passes of 57 and 63 yards as Wake Forest (7-6) finished with a
winning record for the second straight year. The Deacons last had
consecutive winning seasons in 1987-88.

"I couldn't ask for a better game to finish out my career here
at Wake Forest,'' MacPherson said.

The Ducks (7-6) started the season 6-0 and were ranked as high
as No. 6, but they simply weren't the same without quarterback Joey
Harrington, a 2001 Heisman finalist. The team lost five of its last
six, a year after going 11-1 and winning the Fiesta Bowl.

Entering Monday's game, Wake Forest was ranked eighth nationally
in rushing offense, averaging 239.9 yards a game. The Deacons ran
for 256 against Oregon, even with their early emphasis on the
passing game.

"We knew going against Oregon that they had a real good rushing
defense, so we knew we could have a typical game plan,'' Wake
Forest coach Jim Grobe said.

Oregon coach Mike Bellotti said the Ducks figured as much.

"I expected a little bit more than they've thrown the rest of
the year,'' he said. "Our problem was missed plays.''

Oregon starter Jason Fife completed just 1 of 7 passes for 4
yards before he was replaced late in the first quarter by redshirt
freshman Kellen Clemens.

MacPherson fared batter, hitting Anderson with a 57-yard scoring
pass early in the second quarter to push Wake's lead to 14-3.
MacPherson added a 1-yard touchdown dash with 2:40 left before
halftime.

With 26 seconds left in the half, Clemens hit Samie Parker with
a 7-yard scoring strike to make it 21-10.

Matt Wisnosky had a 43-yard field goal for Wake Forest before
Oregon's Matt Floberg narrowed it to 24-17 on a 1-yard run with
5:39 left in the third quarter.

MacPherson, who had just six touchdown passes going into the
game, closed the third quarter with his 63-yard touchdown pass to
Anderson. Chris Barclay added a 12-yard TD run late in the game for
the final margin.

Oregon tailback Onterrio Smith, who missed three of the last
four games with an injury to his left knee that required surgery in
late November, gained 62 yards on 18 carries in what would be his
final college game if he declares himself eligible for the NFL
draft. In nine regular-season games, Smith ran for 1,079 yards and
12 touchdowns.

Barclay led the Deacons with 82 yards on 19 carries. Tailback
Tarence Williams, who got off to a slow start this season but
rushed for 550 yards in his final five games, had 53 yards on 16
carries.

Late in the third quarter, Williams appeared to twist his left
knee on a run and spent several minutes prone on the field as
trainers attended to him. He was taken from the field by cart and
did not return.

The second annual Seattle Bowl marked the first meeting between
the Ducks and Demon Deacons since Dec. 31, 1992 in the Independence
Bowl in Shreveport, La. Wake Forest won 39-35.