Quarterback Kyle Orton wanted to change that. Orton passed for
283 yards and two touchdowns as Purdue overcame a 17-point deficit
to beat Washington 34-24 in the Wells Fargo Sun Bowl on Tuesday. 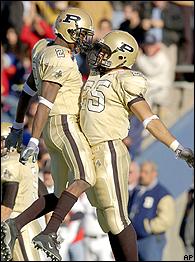 Although Purdue (7-6) has gone to six straight bowl games under
coach Joe Tiller, it had lost its last three before beating
Washington.

"We haven't proved how good we are in our last four bowl
appearances, so today we redeemed ourselves,'' Orton said.

Tiller has never had a losing season at Purdue since taking over
for the start of the 1997 season.

"We played well here last year, but came up a little bit
short,'' Tiller said. "But we were not to be denied this year.''

John Standeford caught 10 passes for 105 yards and a touchdown,
and Taylor Stubblefield caught seven passes for 92 yards for
Purdue, which had 400 yards of offense to the Huskies' 316.

It wasn't easy for the Boilermakers, who overcame an early
17-point deficit.

"We got behind, but we never rolled over,'' Tiller said. "In
an era where many teams do, we did not.''

Cody Pickett was 25-of-54 with one interception and a touchdown
for Washington (7-6). The Huskies took a 17-0 lead after the first
quarter but did not score again until the fourth quarter.

Purdue started its rally with 5:09 left in the second quarter
when Orton threw a 7-yard touchdown pass to Standeford.

The Boilermakers scored again with 35 seconds before halftime on
a bit of luck. Brandon Jones fumbled on the 1-yard line, but Ray
Williams recovered the ball in the end zone to cap a 66-yard drive
and make it 17-14 at the break.

After a 22-yard field goal by Berin Lacevic tied the game,
Purdue took its first lead with 3:33 left in the third quarter on a
10-yard touchdown run by Joey Harris to make it 24-17. Harris led
the Boilermakers with 93 yards on 23 carries.

"We know how to come from behind,'' Harris said. "We've beaten
adversity all year.''

Washington had a total of 44 yards rushing on 24 carries.

The Huskies finally scored again when Pickett threw a 12-yard
touchdown pass to Patrick Reddick to make it 34-24 with 3:31
remaining.

"It was a disappointing year, we have to get back to work,''
Neuheisel said. "To get back to the upper echelon. Not only in our
conference but in the national picture. This is not what I
envisioned for the Washington Huskies.''

In the first quarter, the Huskies needed less than three minutes
to rack up 14 points.

Purdue kicker Brent Slaton fumbled a snap, and Washington
recovered at the 7-yard line. On the next play, Pickett threw a
touchdown pass to Reddick to give Washington a 7-0 lead.

Reddick was Washington's leading receiver with 63 yards on six
catches for two touchdowns.

On Purdue's next series, Orton fumbled the snap, and Marquis
Cooper recovered for the Huskies and ran the ball 31 yards for a
touchdown to push Washington's lead to 14-0 with 8:40 left in the
quarter.