NEW ORLEANS (AP) -- Georgia finished its memorable season in style, though the Bulldogs made it sound like the Nokia Sugar Bowl was only the beginning. 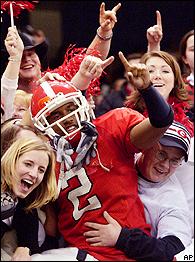 Certainly, they don't plan to go another 20 years between championships.

"It's a big step,'' coach Mark Richt said after No. 4 Georgia cruised past his former team, beating 16th-ranked Florida State 26-13 Wednesday night. "In the locker room, we were happy, but we didn't act like it's the first time we've won a big game. The players are learning how to win, expecting to win. That's a great sign.''

MVP Musa Smith rushed for 145 yards, Bruce Thornton returned an
interception for a touchdown and backup quarterback D.J. Shockley
tossed a scoring pass in his only throw of the night.

Billy Bennett kicked four field goals as the Bulldogs went conservative, throwing a season-low 15 passes. All they had to do was let Fabian Walker, making his first start at quarterback for the Seminoles, beat himself.

Walker obliged, throwing two interceptions and also losing a fumble. The Seminoles had only one turnover in their last four regular-season games.

The Bulldogs (13-1) became the first team in school history to
win 13 games, capping a breakthrough season in which Richt steered
the program back to national prominence in just his second season.

Richt even got the satisfaction of beating his mentor. He served
14 years on Bobby Bowden's staff at Florida State before moving to
Georgia in 2001.

"Coach Bowden is still the teacher,'' Richt said. "He's one of the best men I've ever known. But I had to play against him. No matter who you play, you want to win the game.''

Said Bowden, "Yeah, I'm happy for him, but it doesn't overcome my sadness for me.''

Plenty of Georgia fans were on hand to savor their team's return to the national stage. Red and black dominated the Superdome as the Bulldogs made their first Sugar Bowl appearance since the 1982 season -- also the year of their last Southeastern Conference championship.

Florida State (9-5), playing in the Sugar Bowl for the sixth
time in 15 years, was viewed as the most unworthy team in the Bowl
Championship Series. Their performance did little to change that
perception, handing Bowden his first five-loss season since 1981.

In all fairness, the Seminoles might have given a better showing at full strength. But they lost their top two quarterbacks and had to go with third choice Walker, who had thrown only eight passes in his career.

Why was Walker playing? Adrian McPherson was kicked off the team in late November for allegedly stealing a check, while Chris Rix was suspended from the bowl after he overslept and missed a final exam.

Walker, a Georgia native, threw both interceptions when trying
to force passes to well-covered receivers while being pressured.
Thornton took his interception 71 yards for a touchdown, putting
the Bulldogs ahead for good with 6½ minutes left in the first half.

On Florida State's first offensive play of the second half, Walker was stripped of the ball by Will Thompson and Ken Veal recovered for the Bulldogs, setting up Bennett's third field goal of the night and a comfortable 23-7 lead.

The Seminoles gave star receiver Anquan Boldin a shot at quarterback, hoping he could spark the offense. It might have worked, too, if Talman Gardner had not dropped a perfectly thrown deep pass near the goal line.

Boldin hopped up and down in dismay after the ball slipped through Gardner's hands. On the next play, Boldin bruised his left hand when dragged down behind the line, knocking him out for the rest of the first half.

After getting his hand checked out, Boldin came back to throw a
40-yard touchdown pass to Craphonso Thorpe on the final play of the
third quarter. It wasn't enough.

Boldin also caught a touchdown pass, hauling down a 5-yarder
from Walker early in the second quarter to give the Seminoles a
short-lived 7-3 lead.

Georgia's offense didn't do much, managing just one touchdown on
its own -- and even that score was set up by Damian Gary's 26-yard
punt return.

Shockley, who played four series in relief of starter David
Greene, took advantage of Gary's long return right away, lofting a
37-yard touchdown pass to Terrence Edwards on his only throw of the
night.

On his way down the field to celebrate, Shockley jawed with a couple of Florida State players, undoubtedly a holdover from a fumble on his first possession.

That was Georgia's only turnover. The Bulldogs went conservative, relying on one of the nation's top-ranked defenses to shut down the Seminoles.

Smith had 18 of his 23 carries in the second half, rushing for 108 yards over the final two quarters.

"We started to pound the ball down their throat,'' he said. "At halftime, coach Richt said he was going to run it in the third and fourth quarters.''

"When your defense is playing good and your kicking game is so solid, it can get kind of boring,'' Richt said. "But winning is fun.''

Florida State, which earned an automatic BCS bid by winning the
Atlantic Coast Conference, was the only team playing in a major
bowl with more than two losses.

For the second year in a row, the Seminoles failed to win 10
games -- a standard that used to be automatic in Tallahassee.

In fact, Florida State has lost nine games the last two years -- equaling its total number of defeats from 1992-99.