ATHENS, Ga. (AP) -- Of all the mistakes No. 8 Georgia made
Saturday -- and there were plenty -- coach Mark Richt blamed himself
for perhaps the biggest one: leaving wide receiver Fred Gibson on
the field for a meaningless kickoff. 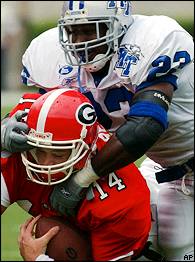 Gibson pulled a hamstring returning the kick with less than two
minutes left in a sloppy 29-10 victory over Middle Tennessee on
Saturday, and he might not be available for the Southeastern
Conference opener next week against South Carolina.
Georgia coach Mark Richt was not sure how bad Gibson's injury
was, and Gibson was not available for comment.
"You never know how quickly a guy can recover from that,"
Richt said. "I knew Fred was in the game, and that just should not
have happened. That was the biggest disappointment to me."
Michael Cooper ran for the first two touchdowns of his career,
David Greene threw for 267 yards and Billy Bennett added three
field goals for the Bulldogs (2-0), who were 29{-point favorites
against a team that lost its opener to Division I-AA Florida
Atlantic.
They also set a school record with 18 penalties, easily beating
the previous mark of 14 set in 2001 against Georgia Tech.
"We were just not very disciplined," Greene said. "You name
it, we did it."
Cooper, a freshman, took over in the second half after starter
Tony Milton left with a bruise on his leg. Cooper finished with 90
yards rushing, and Georgia gained 468 total.
Reggie Brown caught seven passes for 88 yards for Georgia.
"Man, they were playing that cover-2 and laying so far off of
us," Brown said. "It was easy. It was the kind of day that I wish
we had thrown every down. Third-and-1, throw it deep."
The Blue Raiders (0-2) tied it at 3 in the second quarter on a
41-yard field by Brian Kelly, but they couldn't generate much
offense in the second half. After gaining 107 yards before the
break, Middle Tennessee was held to only 64 yards for most of the
final two quarters, until Andrico Hines threw a 71-yard touchdown
pass to Kerry Wright with about two minutes left.
"Georgia took our deep routes away, and we tried other things
to take advantage," Blue Raiders coach Andy McCollum said.
Hines was 18-for-25 for 173 yards.
"We shot ourselves in the foot," he said. "We moved the ball,
but we were not able to execute. We are not good enough right now
to upset a top-10 team."
The first half ended with Georgia leading only 10-3, a
frustrating beginning at newly expanded Sanford Stadium. The
capacity increased nearly 6,000 to 92,020, the fifth-largest on
campus stadium in the country.
The Blue Raiders held the ball for seven minutes on the drive
that tied the score, using 17 plays to move 64 yards. They used a
variety of short passes and draws to befuddle the Bulldogs defense,
and Hines had a hand in 11 of the plays.
"I think they knew they couldn't get the big plays on us,
because they probably were a little scared of our pass rush, so
they went with the short stuff," Georgia defensive end David
Pollack said. "They did what they had to do on that one drive."
Georgia quickly retook the lead, driving 81 yards on only seven
plays, a drive capped by Cooper's first touchdown. Greene did most
of the damage, though, completing 4 of 5 passes for 88 yards.
But the Bulldogs clearly were held back by penalties -- 13 for 99
yards in the first half alone. Their second drive of the game
featured five infractions in 11 plays, including three for holding.
There also were two for delay of game, and Greene got sacked for
a 7-yard loss during the possession.
"Who knows where those penalties came from?" said guard
Bartley Miller, nabbed for one false start. "You're going fight
with the refs about what a penalty is, but they came in here and
told us, 'Boys, you got to get it right."'
The offense wasn't alone in making the errors, though. Five
offside penalties in the first half helped Middle Tennessee keep
drives alive, as did a pass interference on cornerback Kenny
Bailey.
Tackle Ray Gant got two of the offside penalties, and each team,
he immediately was replaced.
"Man, I was just hungry," Gant said. "They had an unorthodox
snap count, and it just got me all the time. You're trying to time
it, and I just didn't get it right a couple of times."
Georgia finally put the game away on Bennett's final field goal,
a 24-yarder early in the fourth quarter, and the first career
touchdown for third-string tailback Ronnie Powell. That made the
score 29-3.