Jammal Lord ran for 72 yards and a touchdown as No. 23 Nebraska
(2-0) overcame a slow start to beat Utah State 31-7 Saturday. The
Cornhuskers, who scored one offensive touchdown in last week's win
over Oklahoma State, produced three despite generating 405 total
yards against the Aggies. 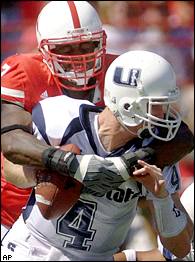 "The offense continues to move the ball, but we're having
trouble getting touchdowns," Solich said. "We've got to be more
point-productive at the end of our drives."

Lord also completed 8 of 12 passes for 85 yards before giving
way to Joe Dailey late in the third quarter.

"It wasn't the kind of game where you ever felt real
comfortable," Solich said. "There were enough things that weren't
crisp and sharp that it was a little frustrating."

But Cox went 4-of-18 the rest of the way -- and the Demorrio
Williams-led Nebraska defense limited the Aggies to just 93 total
yards after the first quarter.

"We had to see what they came out and did," defensive
coordinator Bo Pelini said. "Once we saw that, we made our
adjustments. We settled down and played good football."

Nebraska scored on its first possession, with Lord running 15
yards for the touchdown.

After Sandro DeAngelis missed the extra point, the Aggies
quickly moved the ball down the field.

Cox passed three times to tight end Chris Cooley on a four-play
touchdown drive that the two capped with a 41-yard pass. Justin
Hamblin's kick gave the Aggies a 7-6 lead.

"We accomplished what we needed to accomplish by keeping them
off-balance," USU coach Mick Dennehy said. "Easy throws, things
that have a tendency to allow you to get a little bit of momentum
and get on a roll, and I think that's exactly what happened."

But after allowing 145 yards in the first quarter, Nebraska's
defense gave up just 7 in the second.

Williams forced two straight fumbles by Cox, and the Huskers
converted both into points.

"He's a difference-maker," Dennehy said, "and those two
turnovers he caused were a major, major difference in this game."

One play after Williams forced and recovered Cox's fumble at the
USU 1, Judd Davies bulled into the end zone for the go-ahead
touchdown.

Williams hit Cox's blind side again on the first play of USU's
ensuing series, with Titus Adams recovering the fumble.

Williams had a third sack in the second quarter, tying the
single-game school record for sacks by a linebacker.

"I'm trying to bring momentum to the defense," Williams said.
"When they see big plays out there, they want to make big plays,
too."

Cox finished 17-of-33 for 178 yards, with an interceptions, and
David Fiefia had 60 yards on nine carries.

Dailey, a freshman, ran nine times for 47 yards and completed 4
of 5 passes for 47 yards in his first appearance. He fumbled once
on a quarterback sneak near the goal line.

Solich said Dailey has earned more playing time but stopped
short of saying he was considering a two-quarterback system.

"Joe showed he can play quarterback in our system," Solich
said. "In this day of college football, you need two quarterbacks
to be prepared. It looks like we might have a chance to have two
quarterbacks who can get some things done."