"We tried to emphasize the fact that we have some traditions,
too," Smith said. 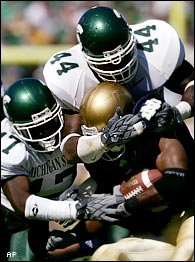 The Spartans (3-1) kept a recent tradition going by beating the
Irish (1-2) for the fourth straight time at Notre Dame Stadium,
winning 22-16 on Saturday.

Jaren Hayes scored on a 71-yard run and Greg Taplin returned an
interception 40 yards for a touchdown for the Spartans in their
sixth victory in the past seven games against the Irish (No. 23 ESPN/USA Today).

"The bottom line is this wins means a lot to our players,"
Smith said.

The Irish (1-2), beaten 38-0 by Michigan last week, fell below
.500 for the first time since the end of the 2001 season. Since
getting off to an 8-0 start under Tyrone Willingham, the Irish are
3-5 and have scored just three touchdowns this season.

Asked if the loss to Michigan State was especially painful,
Willingham said they all hurt.

"Every loss has that jagged edge that just sticks in you," he
said. "We've got to find a way to deal with this."

The game pitted the nation's second-worst pass offense in Notre
Dame against the nation's third-worst pass defense in Michigan
State. The Irish had a season-high 202 yards passing, but 85 of it
came in the fourth quarter as the Spartans tried to hang on. That's
also when Taplin made his game-clinching touchdown on his first
career interception.

"It's a play that we practiced a lot this whole week, so I was
prepared to do it. In the game it was second nature," Taplin said.
"I didn't think anyone would catch me because I'm pretty fast."

The Spartans took control, though, on the TD run by Hayes, who
ran for 109 yards on 19 carries and had two catches for 18 yards
after fumbling the ball in the first quarter. On the first play
after a punt late in the third quarter, Hayes took a handoff from
Jeff Smoker, cut back left, faked out linebacker Derek Curry, cut
left again and outraced cornerback Preston Jackson to the end zone
to give the Spartans a 13-6 lead.

"I saw the hole and I ran to the end zone," he said. "I kind
of wanted to redeem myself for the fumble I made so I decided I
wanted to make a big play today."

The game was sloppily played by both teams and included a number
of questionable calls by officials. Willingham said those didn't
matter, though.

"We still had opportunities to win the football game and we
didn't do the things we needed to," he said. "We showed some
improvement in some areas, but we still have areas that we need to
work on."

The game didn't do anything to quiet Irish fans' growing
discontent with Carlyle Holiday, who was 10-of-25 passing for 99
yards. He has led the Irish on one TD drive through three games. He
was replaced by freshman Brady Quinn for the final two series of
the first half.

"I thought that by sitting him out for a while, it would give
him a chance to see things better," Willingham said. "I thought
it worked to some extent."

Quinn replaced Holiday again in the fourth quarter and threw a
29-yard scoring pass to Rhema McKnight. Quinn, who was 7-of-17
passing for 99 yards, has guided the Irish to two of Notre Dame's
three TDs this season.

"His progress has been tremendous since he's gotten here,"
Willingham said. "He gets better and stronger each day."

Willingham said he doesn't know who will start against Purdue.

The Irish closed to 22-16 on Quinn's TD pass with 2:29. The
Irish attempted an onside kick, but Michigan State backup
quarterback Drew Stanton recovered. Stanton had failed to recover
the onside kick last week in a home loss to Louisiana Tech.

"I figured they would kick it to me," he said.

Smoker, who was questionable for the game after missing the last
three quarters against Louisiana Tech, was 13-of-27 passing for 119
yards with two interceptions.

"His presence made a difference," Willingham said. "It gave
his entire team a lift. He's a quality quarterback and did some
great things for them."

McKnight said the mood in the Irish locker room was "dead."

Smith said he told the Spartans not to get too excited about
beating the Irish.

"This is still the same team that lost to Louisiana Tech last
week," he said.