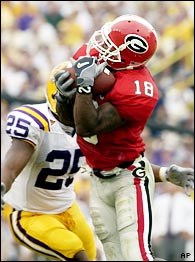 "Skyler was actually supposed to pick for Mike's guy," Mauck
said. "Skyler ran past him and I saw him out of the corner of my
eye. I just threw it up and he made a great play."

Green decided to do a little ad-libbing as the play unfolded.

"I was set up to run a different rout," Green said. "And I
just kind of saw what was happening at the time and I slipped on
behind the defender and made the catch."

The bit of luck was set up by good play by LSU, Georgia coach
Mark Richt said.

"They bought a lot of time on that play," Richt said. "They
allowed the quarterback to see it really well, stop and set his
feet and make a really pretty throw."

LSU (4-0, 1-0) appeared to be in control late in the fourth
quarter. The Tigers put together a long drive, going to Georgia's
18. But Mauck fumbled on a keeper, turning the ball over.

David Greene hit Tyson Browning with a screen pass and Browning,
after getting some key blocks, ran 93 yards to tie it at 10 with
4:25 remaining.

Devery Henderson returned the kickoff 48 yards to set up the
Tigers. Six plays later, Mauck hit Green with the game-winner.

Georgia's defense, which had given up only 17 points in the
first three games, kept LSU's high-scoring offense in check for
much of the game. The Tigers entered the contest ranked second in
the SEC and fourth in the nation with 47.7 points a game.

"It was a heavyweight fight," LSU coach Nick Saban said. "A
real street fight. Both teams competed their hearts out. It was
about as physical a game as I've seen in a long time."

The Bulldogs were able to keep pressure on Mauck with their
defensive front four, leaving seven people to stop the Tigers'
passing game and slow the run.

Clayton, who led the SEC in receptions per game and yards, was
held to two catches for 23 yards.

Greene completed 20 of 44 passes for 314 yards and a touchdown.
He was sacked once and threw two interceptions. His first
interception was his first this year in 174 passes.

Greene was shaken up in the third quarter and replaced by D.J.
Shockley for two series. Shockley was sacked twice and called for
intentional grounding.

Richt said after the game that Green hyperextended his knee.
Georgia defensive end David Pollack left the game after injuring
his kneecap.

Mauck completed 14 of 29 passes for 180 yards and a touchdown.
He was intercepted once and sacked once.

The Bulldogs took the lead in the first quarter on a 33-yard
field goal by Billy Bennett, the preseason All-SEC kicker. It
looked as if they would go up 6-0 when Bennett kicked a 43 yard
field goal with 35 seconds left. Penalties forced Georgia to kick
it again. The second time the ball sailed wide right and the score
remained 3-0. Bennett got another chance with 11:25 left in the
second quarter but his 42-yard attempt missed to the left.

"I think we've been taking Bennett for granted around here a
long time," Richt said. "He's made those kicks in the games we've
been winning. Gosh, you take nine points right there we've got a
chance to win the game."

After being held to 48 yards of total offense -- including two
yards rushing -- and two first downs in the first 24:43 of the first
half, the Tigers put together an 85-yard drive, capped by a 21-yard
run by Carey to go up 7-3. The lead stood up at the break as
Bennett's 36-yard field goal attempt with 44 seconds left hit the
left upright. Bennett had made six straight going into the game.

LSU stretched its lead to 10-7 in the third quarter when Ryan
Gaudet hit a 47-yard field goal. Gaudet's 48-yard attempt in the
fourth quarter was blocked.