AUBURN, Ala. (AP) -- Carnell Williams and the Auburn Tigers made a
big physical statement to Tennessee -- and the rest of the
Southeastern Conference. 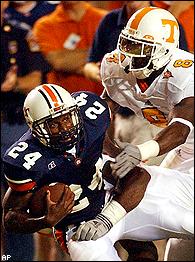 Williams ran for 185 yards and the Tigers made a late defensive
stand to beat No. 7 Tennessee 28-21 on Saturday night, proving that
their preseason No. 6 ranking wasn't such an absurdity.

"They were talking all week about them being so physical and us
being so soft," Auburn linebacker Karlos Dansby said. "We just
came up and hit them in the mouth."

Especially Williams, a preseason All-SEC pick who had his first
100-yard effort of the season with a tireless 36 carries and made
two key receptions for first downs.

"From here on out, I think we're going to show the country we
are one of the best teams in the country," said Williams, who
originally committed to play for the Volunteers out of high school.

Jason Campbell had two touchdown passes for Auburn (3-2, 2-0
SEC), which has won five of its last seven games against top-10
teams.

The Tigers finally showcased their heralded tailbacks in a
marquee game with their third straight victory after an 0-2 start
that dropped them out of the rankings.

The Volunteers (4-1, 2-1) abandoned their own star tailbacks
Jabari Davis and Cedric Houston from the outset, trying to ride
Casey Clausen's passing to the victory. The result was an anemic
running game that netted 4 yards on 16 carries, 184 yards below
their season average.

"Some of their backs were talking trash and stuff, saying
they're the best backfield in the SEC," Williams said. "I felt
like we as a team needed to come out and make a statement."

Clausen still nearly pulled it off, throwing two fourth-quarter
touchdown passes before a late interception and rallying the team
from an early 14-0 deficit.

"The first half we didn't make any plays, and that made the
second half tougher," said Clausen, who had won his first 11
starts on the road.

He led the Vols to the Auburn 29 after converting a
fourth-and-15 with a 22-yarder to Chris Hannon, who dropped a pass
downfield on the previous play.

Clausen rushed 10 yards for another first down and was hit out
of bounds to give Tennessee a first down at the Auburn 29. Carlos Rogers picked off a pass intended for Mark Jones on the next play.

The Vols had taken over at their own 29 with 1:52 left and no
timeouts after John Vaughn pushed a 46-yard field goal wide right.

Two of the league's top 10 rushers, Houston and Davis combined
for only 14 yards on nine carries.

The Tigers amassed 264 rushing yards, the most allowed by the
Vols since Kansas State gained 297 in the Cotton Bowl on Jan. 1,
2001.

"This is probably the best job we've done on offense in the
last two years," said Tommy Tuberville, whose offensive coaches
drew fire after the Tigers failed to get a touchdown in the first
two games.

The running game helped Auburn hold onto the ball for more than
36 minutes and negated Clausen's 355-yard performance. He completed
30 of 47 passes, a career high for attempts and matching his
highest completion number.

"We never got in sync tonight," Tennessee coach Phillip Fulmer
said. "We worked well all week, and I thought we were prepared. In
the end, we were too nice to Auburn (with mistakes)."

The Tigers made it 28-7 early in the fourth quarter. Campbell
set up an 8-yard touchdown pass to tight end Cole Bennett with a
play-action fake, rolling right and hitting his wide-open target.
It was only his second pass of the half.

Clausen hit Jones on a 16-yarder and Hannon on a 28-yarder,
capping two drives that took less than five minutes off the clock.

Williams' 1-yard plunge gave Auburn a 21-7 lead with 4:38 left
in the third quarter, his eighth straight rush. The Tigers ran it
on 11 straight plays.

The Vols' first two second-half drives ended with a missed field
goal and a fumble in Auburn territory.

"We finished the game good, but we had a terrible start,"
Houston said. "We didn't get it going, and when we did it was too
late."