Leinart carved out his own identity Saturday, shaking off a leg
injury to rally Southern California (No. 10 ESPN/USA Today, No. 10 Associated Press)
to a 37-17 victory over
Arizona State. 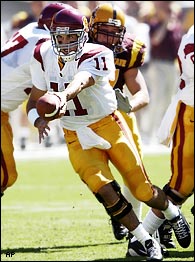 "I was really proud of Matt Leinart," coach Pete Carroll said.
"I thought that was a fantastic effort to come back. He easily
could have not finished that game."

Carroll might have found his next dominant tailback, too.
LenDale White, a freshman with 17 carries coming in, ran for 140
yards and two touchdowns on 21 attempts.

Ryan Killeen had three field goals for the Trojans (4-1, 1-1
Pac-10), who kept their slim national title hopes alive by winning
after a triple-overtime loss at California last week.

The victory left the Trojans one shy of becoming the 10th
Division I program with 700.

Southern Cal's defense, which allowed a 100-yard rusher at Cal
for the first time in 17 games, held the Sun Devils (2-3, 0-2) to
61 yards rushing and stopped Andrew Walter when it counted. Walter
was 19-of-38 for 305 yards, but couldn't prevent Arizona State's
third straight loss and fourth in a row to the Trojans.

Walter passed 12 yards for a score to Skyler Fulton in the first
quarter, and Loren Wade scored on a 1-yard dive for the Sun Devils
in the third.

Derek Hagan had career highs of eight receptions and 170 yards,
giving Walter the go-to receiver he's been missing since Shaun
McDonald left for the NFL after last season.

"This was the first time I felt we were clicking," Walter
said. "We were running the ball great, throwing the ball on time.
It was in rhythm and felt real good. That's a positive."

Leinart completed 13 of 23 passes for 289 yards, with scoring
strikes of 57 yards to Keary Colbert and 33 yards to Brandon
Hancock, in about three quarters.

"I just wanted to tough it out," Leinart said. "It was
bothering me a lot, but they taped up my knee and my ankle. And,
you know, we did awesome in the second half. Offensively,
defensively, it was just a good game for us."

The left-hander, who moved into the starting spot in spring
practice, hurt his right leg when linebacker Justin Burks sacked
him on USC's first play of the second quarter.

"I give him credit," Sun Devils linebacker Jamar Williams
said. "He took his team on his shoulders and won it for them."

USC trailed 10-7 when Leinart left and 17-10 when he returned
for the Trojans' first possession of the third with 9:25 remaining.

To begin with, Leinart mostly handed off to White, who capped
the drive that tied it at 17 with a 25-yard run.

But it was clear the entire team was energized by Leinart's
return.

The defense sacked Andrew Walter twice on Arizona State's next
possession, and he passed the Trojans into the lead with a 33-yard
throw to Mike Williams at the start and another to Hancock, who
finished it by catching the ball in the flat and reaching the end
zone thanks to a strong block by Colbert.

Colbert scored with 1:30 left in the third.

Killeen ran the score to 30-17 with fourth-quarter field goals
of 28 and 38 yards, and USC clinched the win when defensive lineman
Kenechi Udeze stopped Hakim Hill for no gain on fourth-and-1 at the
Sun Devils 29.

The 225-poound White, the biggest of the Trojans' quartet of
young tailbacks, covered the last 23 yards in four carries, scoring
on a 6-yard run with 5:12 left.

"They'd kind of been hinting all week that they were going to
go with that bigger back and try to push it downhill more,"
Arizona State coach Dirk Koetter said.

White was humble afterward, saying he had no clue he would get
the majority of the work.

"It's never a personal statement," he said. "It's a team
thing with me all the time. I just wanted to come out here today
and play hard."

The Sun Devils squandered an early opportunity when Reggie Bush
fumbled the opening kickoff. Jesse Ainsworth recovered on the USC
34, but three plays resulted in a net loss of five yards, and
Arizona State punted.

Colbert took care of most of the yardage on USC's ensuing
95-yard drive, taking a short pass 34 yards on third-and-6 and then
catching the bomb from Leinart to make it 7-0 just 3:17 in.

The Sun Devils tied it on Fulton's TD grab minutes later and
took a 10-7 lead on Ainsworth's 25-yard field goal 23 seconds into
the second quarter.