FAYETTEVILLE, Ark. (AP) -- Arkansas was in rally mode again until
a roughing-the-passer penalty saved a victory for Florida.

The Gators nearly blew a 26-point lead, but held on for a 33-28
win over the 11th-ranked Razorbacks on Saturday when Arkansas
safety Tony Bua went for Chris Leak's head on a sack attempt with a
minute left.

The blow wiped out Sam Olajubutu's interception and let the
Gators run out the clock. 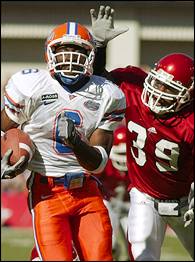 "You are going to take blows that you don't want to take, but
sometimes it works in your favor," Leak said.

With three touchdowns in a four-minute stretch of the last
quarter, Arkansas erased nearly all of a 33-7 Florida lead. On a
third-and-5 at midfield, Bua chased Leak toward the sideline and
Leak dumped a weak pass right into Olajubutu's hands.

The Gators ran out the clock after officials counted off 30
yards in penalties against the Razorbacks -- 15 for complaining
about the call.

"It doesn't matter. The yellow flag was there. You know I can't
say anything," Arkansas coach Houston Nutt said after being asked
about the call after the game.

Three weeks ago, Arkansas trailed Alabama by 21 in the third
quarter. The Razorbacks tied the game in regulation and won in two
overtimes.

"If you let your guard down, they'll get you," Florida coach
Ron Zook said.

Leak, a true freshman, had led the Gators to a big lead by
throwing short and letting his receivers and ball carriers run long
in the Gators' second straight road win over a ranked team.

However, after Keiwan Ratliff's 44-yard interception return put
Florida up 33-7 early in the fourth quarter, Arkansas scored 21
points in three quick drives. Quarterback Matt Jones was 8-of-11
for 132 yards and carried once for 26 yards in the late flurry.

"Give credit to Arkansas. They never gave up and kept
fighting," Gators safety Daryl Dixon said. "They showed that a
game is 60 minutes long."

Leak completed 20 of 34 passes -- most of them short tosses to
the wing that spread out the Arkansas defense. Ciatrick Fason
turned a screen pass into a 33-yard score and also had a 75-yard TD
run.

"We knew Arkansas was going to bring a lot of pressure so we
tried to use the screen against them," Leak said. "It is
something we have always had but we decided to use it a little more
this week."

The Gators won at No. 6 LSU 19-7 last week. Florida has won 42
of its 51 conference road games since the league expanded to 12
teams in 1992. Until Saturday, Arkansas had never scored more than
seven points against the Gators in an SEC game.

The three touchdowns came when it appeared the Razorbacks were
already out of it. Jones hit Richard Smith for 12 and 10 yards and
Jason Peters for 8 before nearly getting a chance for more.

"The guys gave great effort and we stopped ourselves," Nutt
said. "It's a disappointing loss. It's very hard to swallow."

Until Arkansas' late rally, Leak had made a shamble of Arkansas,
hitting passes on 5- and 7-yard patterns that receivers turned into
a 269 yards of offense.

"We knew we were going to face a good team," Nutt said. "The
way they went into Baton Rouge and came out with a win (against
LSU), you could tell their freshman quarterback was gaining
confidence."

The screen pass to Fason gave Florida a 10-7 lead -- two plays
after Leak hit Ben Troupe for 29 yards on a third-and-5. On
Florida's next drive, Leak hit Jemalle Cornelius for 21 yards on
third-and-5 to set up Matt Leach's field goal.

Fason ran 75 yards for a score on the first play of the second
half, putting Florida up 19-7. DeShawn Wynn scored from the 17
later in the period to end a drive set up when Ratliff intercepted
Jones' pass at the Florida 25 and returned to the 38.

Ratliff's 44-yard TD return appeared to seal the game for
Florida at 33-7, but Arkansas moved 64 yards in five plays to begin
narrowing the gap. Smith's 12-yard catch made it 33-14, then two
more drives of less than a minute cut Florida's lead to five.

Arkansas' Cedric Cobbs had 88 yards before leaving with a pulled
hamstring, but the Razorbacks' offense often followed a nice set of
plays with a general malaise.

Jones and backup Ryan Sorahan were 9-of-9 passing for 86 yards
to open the game, but the Razorbacks' only early score came on a
sharp-looking Cobbs-led drive that put Arkansas up 7-0. Cobbs
carried between the tackles for 31 and 13 yards and scored from the
7 after hit George Wilson on the right side for 18.

Later in the first half, Jones hit Steven Harris for 31 yards on
a third-and-7 to the Florida 35, but Chris Balseiro missed a
53-yard field goal.