"We played in the kind of fashion that we have been for a while
now," Carroll said. "I loved our offense today." 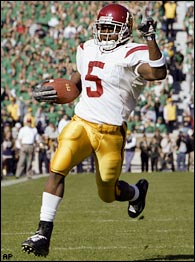 With Matt Leinart throwing for 351 yards and four touchdowns,
Southern California (No. 4 ESPN/USA Today, No. 5 AP) routed the Fighting Irish 45-14 on Saturday.
Last year, the Trojans won 44-13 and knocked the Irish out of
contention for a Bowl Championship Series game.

"We're not anywhere near where I hoped or expected for us to
be," Irish coach Tyrone Willingham said.

With another big win in the one of nation's top rivalries, USC
(6-1) remained in the national title race, while the Irish (2-4)
are in danger of a losing season.

Helping out Leinart was Reggie Bush, who ran 58 yards for a
touchdown. Mike Williams had nine catches for 112 yards and score
and Keary Colbert had eight catches for 120 yards and a TD.

The only time either team has had more lopsided wins in
consecutive years in the 75-year history of the rivalry is in
1965-66, when the Irish won 28-7 and 51-0. Neither team has come
close to dominating by so much in each year, though, in a series
Notre Dame leads 42-28-5.

Willingham said the Irish seemed tentative, just as they did
last season in Los Angeles. Asked why that occurred, Willingham
said: "If I knew, we would have solved that before the final
second ticked off."

Carroll said the Trojans weren't out to do anything special
Saturday.

"We wanted to come in and play like we're capable of playing,
and that situation proved that we could," he said.

Led by Leinart, who replaced Heisman Trophy winner Carson Palmer
this season, USC scored on four of its first five possessions in
getting off to its best start since 1995.

After each team scored on its first possession, USC scored 31
straight points against an Irish defense looking to avenge last
year's poor effort,

Like Palmer, who passed for 425 yards against the Irish last
year, Leinart dominated. He was 16 of 20 for 229 yards with the TD
passes in the first half.

Leinart came out throwing, completing 10 of 13 for 142 yards in
the first quarter, which ended with USC ahead 21-14. Leinart
finished 26 of 34 with no interceptions.

The Trojans picked up where they left off in last year's game,
driving 80 yards on each of their first three drives. Leinart threw
TD passes of 18 yards to Colbert and 7 yards to Williams before
Bush ran 58 yards for another score.

The Irish, who had just 109 yards total offense against USC a
year ago, finished with 279 yards Saturday. Julius Jones scored on
a 22-yard run and Anthony Fasano scored on a 2-yard pass from Brady
Quinn, who was 15 of 34.

"We just broke down," Jones said. "We were playing good the
first couple of drives, after that we fell apart."

The loss was especially disappointing for the Irish, who hoped a
win against Pittsburgh last season would be a turning point.
Instead, they are off to their worst start since 1997 and face
tough games against Boston College and Florida State.

"The better team won today. That's all I have to say," Jones
said.