Leinart threw for 351 yards and four touchdowns as Southern California (No. 4 ESPN/USA Today, No. 5 AP) beat Washington 43-23 on Saturday for its first
victory at Husky Stadium in 10 years. 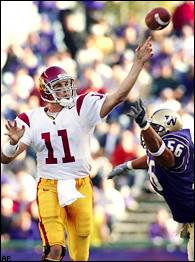 It was another efficient day for Leinart, the steady sophomore
who has kept the Trojans (7-1, 3-1 Pac-10) rolling since taking
over for Carson Palmer, last season's Heisman Trophy winner.

"I'm not going to be perfect every week, but I feel like I'm
getting more comfortable all the time," Leinart said.

Leinart completed 19 of 29 passes without an interception as the
Trojans compiled 565 total yards. In his last four games, he's
thrown for 1,251 yards and 13 TDs without being picked off.

Great numbers, no question, and even USC coach Pete Carroll
marveled at his team's offensive statistics.

"Obviously, it takes a lot to get that done," he said. "The
guy that gets all the credit is Matt Leinart, who just put
back-to-back fantastic games together. A lot of guys contributed to
that, and we are sure clear about that in our locker room."

"He's such a huge weapon for our team," Leinart said. "He was
the player of the game, I thought."

The Huskies (4-4, 2-2), coming off an inspiring 38-17 win last
week at Oregon State, seemed overmatched. They hurt themselves with
awful tackling, unable to contain USC's athletic tailbacks and
receivers.

"They made good plays because we missed tackles," linebacker
Tim Galloway said. "When we have guys there, we have to make the
tackle. There's no excuse for that. Some of those big plays should
have been maybe for a couple yards."

Hershel Dennis carried 14 times for 98 yards. And Bush, a
heralded freshman running back, had a big day with five passes for
132 yards and two TDs. He also rushed 12 times for 81 yards.

"We have a great quarterback and we all clicked today," Bush
said. "It was evident. Our confidence level was high."

Still, this was no easy test for the Trojans, on the road for
the fourth time in five weeks. USC had lost seven of its last 10
visits to Washington.

"This was important to us," Carroll said. "I'm really
pleased. You can't help but say our offense continues to do great
things and move the football like they want to."

Yet while Washington's Williams had more yards, he was held
without a reception in the second half and fumbled in the second
quarter. Carroll credited cornerback Will Poole for his play.

"I thought Will Poole did a fantastic job," Carroll said. "He
did a spectacular job covering the best guy they had. Time and
again, he made great plays."

It was a solid day for the rest of the defense, too.

Washington quarterback Cody Pickett threw an interception off
his back foot with USC's Kenechi Udeze in his face. Ronald Nunn
picked it off and returned the ball 57 yards for a TD in the first
period.

"USC is a good football team," said Pickett, who completed 22
of 44 throws for 274 yards with one TD. "They played well. We had
some opportunities that we didn't convert. We definitely could play
better, but they're a good team."

The Huskies missed receiver Charles Frederick, who sprained his
left shoulder in the first quarter, and tailback Rich Alexis, who
sat out after bruising his thigh last week at Oregon State.

The Trojans led 20-7 early in the second period after a 21-yard
TD run by LenDale White, but missed a chance to extend it when Ryan
Killeen's extra point attempt was blocked. He also missed two field
goals in the half, including a 20-yarder.

"We didn't kick the ball as well as we had in the past,"
Carroll said. "There are some issues that we've got to get cleaned
up."

The Huskies answered White's touchdown with an 80-yard scoring
drive to keep things within reach, pulling to 20-14 when Pickett
found Reggie Williams for a 10-yard TD only 32 seconds before
halftime.

The Trojans regrouped at the break, though, and Leinart found
Bush on a 60-yard pass play to make it 26-14. Bush caught the ball
in stride at midfield and went untouched to the end zone.

"That's the threat he brings," Galloway said. "If they're
matching him up against a linebacker, definitely the advantage goes
to him."