LOS ANGELES (AP) -- Matt Leinart, LenDale White and the rest of
the Southern California Trojans showed there's no doubt who is the
best team in the West. Now they hope to have a chance to show
they're tops in the nation as well. 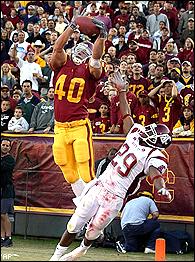 "It was a great night," USC coach Pete Carroll said. "All
kinds of guys made special plays. It was really a fun night of
football."

In what was billed as one of the biggest Pac-10 games in years,
USC (8-1, 4-1) used its big-play ability to break open a close game
in the second half.

The Trojans, fourth in the BCS standings, must hope the dominant
win impressed the poll voters and computers that help determine the
top two teams in the country to play for the national championship
in the Sugar Bowl.

They got a big boost when No. 2 Miami lost 31-7 to Virginia
Tech, leaving Oklahoma as the only major undefeated team.

"We don't want to focus on that," Leinart said. "We just have
to keep winning and let those other things fall into place."

Leinart threw for 191 yards, Mike Williams caught a TD pass and
threw a spectacular pass of his own and Hershel Dennis scored on a
24-yard run as USC scored at least 40 points for a school-record
fourth straight game.

The Trojans won their 13th straight home game and moved into a
tie for first in the conference with the Cougars (7-2, 4-1) and
UCLA.

"We're playing the best football we've ever played," defensive
lineman Omar Nazel said. "Our offense is amazing to watch.
Compared to last year we might be better."

The Trojans had too many offensive options for the Pac-10's top
defense to handle. Keary Colbert had nine catches for 80 yards and
a touchdown and freshman Steve Smith started off the second half
with a 55-yard touchdown catch that made it 22-10.

"We haven't played a team that has that type of speed,"
Cougars coach Bill Doba said.

Williams also had the most memorable play of the game. He took a
lateral from Leinart in the left flat and tried to pass but nobody
was open. Williams then scrambled across the field, sidestepped a
defender and hit a wide-open Gregg Guenther for a 23-yard gain.

Matt Kegel and the Cougars didn't go away easily, mounting a
17-play drive with a pair of fourth-down conversions -- including a
13-yard run on a fake punt by Erik Coleman -- to score on Jermaine
Green's 1-yard plunge.

Leinart then threw a 13-yard TD pass to Colbert on the next
drive and White put the game away with his running. He had runs of
49 and 66 yards in the second half and also scored from 3 yards
out.

Carroll said this year's team is even better than the one Carson
Palmer led to a 11-2 record and Orange Bowl win last season.

"We're a much more balanced team," he said. "Our guys up
front can really come off the football and create space for the
running game."

After Smith's score, Kegel drove Washington State down to the 18
on the next drive before fumbling a snap that Jason Leach recovered
at the 19.

The Cougars finished with minus 25 yards rushing _ although they
would have had 39 except for two botched punt snaps in the first
half.

"Their front four was mixing it up every time," center Mike
Shelford said. "Once we got used to one look, they would come up
with another. They had a lot of mixes and twists."

Kegel was sacked five times and was under constant pressure. He
left the game briefly after spraining his right knee in the second
quarter.

"We shot ourselves in the foot with the penalties early," Doba
said. "I don't know what else to say. They're pretty good."

USC answered with its best drive of the half, going 82 yards in
nine plays to regain the lead on Dennis' run.

USC extended the lead when Washington State backup long snapper
Riley Fitt-Chappell botched two snaps. Starter Troy Bienemann did
not make the trip because of a bad back and the injury proved
costly.

The first, coming from the 28, went over Kyle Basler's head into
the end zone. Basler knocked it out for a safety.

On Washington State's next possession, Fitt-Chappell had another
bad snap from the 46 and Reggie Bush recovered at the 10 to set up
Killeen's second field goal.