AUBURN, Ala. (AP) -- Mississippi got the drive, the drop and the
huge win -- a scintillating blend of clutch plays and breaks that
pushed the Rebels a step closer to their first SEC Western Division
title.

Brandon Jacobs had a 1-yard touchdown run with 2:39 left, and
Ben Obomanu dropped a pass in the end zone on Auburn's final drive,
giving the Rebels a 24-20 victory Saturday. 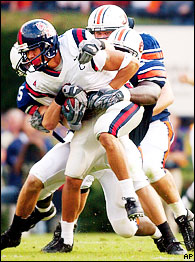 The Rebels (No. 24 ESPN/USA Today) moved to 6-0 in the Southeastern Conference for the
first time since 1962, propelled by a six-game winning streak and
the arm of Eli Manning.

"This is the reason I came back for my senior year, to lead
this team to Atlanta," said Manning, who can make final travel
plans for the SEC championship game with a win in two weeks over
No. 4 LSU.

Ole Miss (8-2) pulled off only its second victory over the
fading Tigers (6-4, 4-2) in the last 11 meetings. Despite two
first-half touchdown passes, Manning was having a mediocre
afternoon by his standards until a brilliant, 80-yard drive in the
final minutes.

On third-and-11, he hit Bill Flowers for 16 yards. Manning came
up even bigger on the next third-down play, lofting a 49-yard pass
to Lorenzo Townsend down the left sideline under pressure.

Two plays later, Manning set up first-and-goal at the 1 with a
2-yard sneak on third down, and Jacobs jumped into the end zone on
the next play.

"When my number was called, I knew I was going to score and I
did," Jacobs said. "This team is about different players stepping
up and making plays each night.

"Our goal from the start is to win the West and we are in
control of that now."

A little late luck propelled the Rebels on their way.

The Tigers drove all the way to the 3, thanks mostly to a
terrific 50-yard catch-and-run by Obomanu. On third-and-2, Campbell
rolled right and, with two defenders in pursuit, spotted a
wide-open Obomanu in the end zone.

The ball hit the sophomore receiver on his No. 2 and bounced
off, spoiling his best career game. On fourth down, a nearly
identical play ended with Campbell forced to loft it toward Jeris
McIntyre, but Eric Oliver batted it away at the last second.

"I really haven't dropped a pass in practice or anything for
about two weeks now," said Obomanu, who had a 68-yard touchdown
among six catches for 150 yards. "It hurts real bad, of course.

"I was right there in good position, wide open in the back of
the end zone."

He said he misjudged the ball and started to leap when he didn't
need to.

"He made a heck of a run to get us down there," coach Tommy
Tuberville said. "He gave us a chance. That's all you can say."

The loss killed the SEC title hopes for the Tigers, heavy
preseason favorites after entering the season ranked No. 6 only to
wind up a candidate for the year's biggest flop.

They've gone from talking titles to hoping for a decent bowl
trip.

"Unfortunately, we are knocked out of Atlanta," said tailback
Carnell Williams, who ran for 103 yards and a touchdown. "We
should be able to win our next two and go to a pretty good bowl."

Ole Miss has its first six-game winning streak since getting
seven straight victories in 1990, and the fans remained in their
seats cheering the Rebels well after the final whistle.

Every other Western Division team has won the division, and
Manning and Co. might be poised to join them.

"We saw 15-20 plays that if we hadn't made them, we wouldn't
have had a chance to win that football game," Ole Miss coach David
Cutcliffe said.

"I can't say enough about how good (Manning) played tonight.

Manning was 19-of-30 for 218 yards and two touchdowns but Ole
Miss controlled the ball for more than 33 minutes against the
league's No. 2 rushing team.

Unable to get their running game going, the Tigers finally went
deep against the Rebels' porous pass defense late in the third
quarter. Campbell's pass was deflected right into Obomanu's hands
for the 68-yard touchdown to give Auburn a 17-14 lead with 2:06
left. It was the team's longest pass play of the season.

The Rebels tied it early in the fourth on a 42-yard field goal
by Jonathan Nichols.

Auburn's Philip Yost then kicked his second field goal, a
30-yarder, with 10:45 remaining but would push a 32-yarder wide
left a few minutes later.