ANN ARBOR, Mich. (AP) -- John Navarre cradled the Big Ten trophy
as he walked into the interview room with tears in his eyes and a
championship hat on his head.

The coronation was complete. 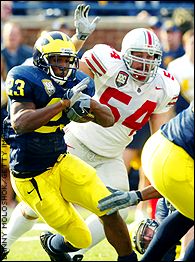 Perhaps the most maligned quarterback in Michigan history will
end his prolific career as a Big Ten champion.

Navarre made all the big plays in the biggest game of his life,
throwing for 278 yards and two touchdowns Saturday to lead the
fifth-ranked Wolverines to a 35-21 win that ended No. 4 Ohio
State's hopes for a repeat national title.

"This is something we haven't had in a while. The Big Ten
championship was our goal and the rest was gravy," Navarre said.
"It's a dream come true."

The Wolverines (10-2, 7-1) snapped a two-game skid against their
biggest rival and won the conference title outright for the first
time since 1997.

They will play in the Rose Bowl unless they move up from ninth
to second in the BCS standings and earn a berth in the national
title game at the Sugar Bowl.

Ohio State's loss opens the door for Southern California and
LSU, the two one-loss teams that trailed the second-place Buckeyes
in the BCS standings.

"It's frustrating -- to be that close to be back in the
championship game," Buckeyes backup quarterback Scott McMullen
said. "Losing to Michigan doesn't make it any easier."

Perry ran through huge holes and Navarre had plenty of time to
throw in the 100th edition in one of college football's greatest
rivalries.

Braylon Edwards had seven catches for 130 yards and two scores
for the Wolverines.

"They've got a great offense," Buckeyes quarterback Craig
Krenzel said. "I think they're playing as well as any team in the
country."

Perry also had 55 yards receiving despite being helped off the
field a couple of times after hard hits.

"There was no way I was coming out of the game," Perry said.
"This is one of those games that's going to be remembered."

The victory was vindication for Navarre, who holds nearly all
the passing records at Michigan but hadn't come up with the big
wins until this season.

The target of boos for much of his career, Navarre received a
loud ovation from the NCAA-record crowd of 112,118 when the seniors
were honored before the game.

Then he delivered to cap a season featuring wins over Michigan's
three biggest rivals: Ohio State, Michigan State and Notre Dame. He
was mobbed as the students rushed the field after he took a knee on
the final play.

"I felt I was established already," Navarre said. "But the
reality was I was going to be defined by this game."

The win came 34 years to the day that Michigan spoiled Ohio
State's repeat bid for a national championship and started a
10-year battle between Bo Schembechler and Woody Hayes that
elevated the intensity of the rivalry.

That was one of many times the Wolverines spoiled the Buckeyes'
championship dreams, including in 1993, '95 and '96. But those wins
came against John Cooper -- who was 2-10-1 in the series before
getting fired -- and didn't give Michigan a Big Ten championship.

The Buckeyes hung tough, cutting a 28-7 lead to 28-21 early in
the fourth quarter, but Michigan's defense held after Chris Gamble
intercepted a pass from Navarre.

On the next drive, Navarre delivered a perfect 30-yard strike to
Tyler Ecker on third down that set up Perry's 15-yard touchdown run
with 7:55 remaining.

Krenzel was 20-for-33 for 221 yards and two scores. He was
replaced briefly by McMullen after separating his left shoulder and
struggled when he returned.

The Buckeyes, who have struggled offensively all year without
suspended star tailback Maurice Clarett, managed only 54 yards
rushing.

Perry's 30-yard run on Michigan's opening drive of the second
half made it 28-7. Perry had the biggest rushing game against Ohio
State all season, topping the 125 yards by Wisconsin's Booker
Stanley in the Buckeyes' other loss.

Michigan took a 21-0 lead midway through the second quarter
behind a sharp first half by Navarre.

He led an 18-play, 89-yard drive to open the scoring before
serving as a decoy on the touchdown. With Navarre lined up wide,
receiver Steve Breaston took the snap and ran an option for a
3-yard score.

Navarre then hit Edwards on touchdown passes from 64 and 23
yards to make it 21-0.

"We missed a tackle of two," Buckeyes coach Jim Tressel said.
"When you miss a tackle on guys who can go, they go."

Krenzel's 8-yard pass to Holmes got the Buckeyes on the board
late in the half. Michigan had outscored its opponents 150-0 in the
first half at home this year before the score.