BOWLING GREEN, Ohio (AP) -- Ben Roethlisberger showed why so many
NFL scouts are watching his every move and waiting to find out if
he'll stay in college another year. 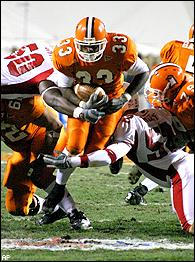 He picked apart the Falcons, spreading the ball over nine
receivers, and along the way setting a title game record with 440
passing yards.

"All I had to do was put it out there and they made the play,"
said Roethlisberger, who gave credit to everyone but himself.

He praised his offensive line for not allowing a sack in the
game.

"I still have a white jersey," Roethlisberger said with a
grin.

He became just the second MAC quarterback to go over 4,000 yards
in a season, joining Byron Leftwich.

Roethlisberger, a junior, led Miami (12-1, 9-0 MAC) to scores on
its first four possessions of the second half. He sealed the
victory with a 55-yard scoring pass to Calvin Murray, who found a
seam along the sideline.

That put the RedHawks up 42-20 with 17 seconds left in the third
quarter in only the third meeting between two MAC teams ranked in
the Top 25.

Roethlisberger, a semifinalist for the Davey O'Brien Award,
given to the nation's top quarterback, has remained quiet all year
about whether he will return to Miami next season.

He's projected to be a top pick in the NFL draft if he comes
out.

"People that know football marvel," Miami coach Terry Hoeppner
said. "It's only people who see him for the first who are
surprised."

It's the first MAC title since 1986 for the RedHawks, who
haven't lost since the season opener at Iowa. The last team to win
all of its MAC games was Marshall in 1999.

Miami will play Louisville in the GMAC Bowl on Dec. 18.

But P.J. Pope fumbled on the first two possessions of the second
half, giving the RedHawks the ball inside the Falcons' territory
each time.

Murray scored on a 1-yard plunge and Mike Smith ran 13 yards for
the first of his two touchdowns, giving the Redhawks a 35-17 lead
with 4:57 left in the third quarter.

Roethlisberger, the conference's player of the year, threw four
touchdown passes for the third straight game and completed 26 of 35
passes.

Harris, a running and passing threat, finished with 260 passing
yards. He was far from sharp much of the game, completing 30 of 49
passes.

Bowling Green had no answer for Roethlisberger, who was on
target all night with short throws and then went deep when the
Falcons played tighter coverage.

"I can't wait to play them when he's gone," Bowling Green
coach Gregg Brandon said. "We had no answer for him. When we did
pressure him, he eluded it and found receivers, and they ran past
us all day."

Miami didn't take the lead until late in the second quarter. Roethlisberger sidestepped a blitzing defender and then rolled
to his left before finding Mike Larkin in the back of the end zone
for a 16-yard scoring strike that put the Redhawks ahead 21-14 with
4:36 left in the half.

It was Roethlisberger's third touchdown pass of the half.

Bowling Green twice jumped ahead by a touchdown earlier in the
half.

T.J. Carswell blocked Mike Wafzig's punt, and the Falcons
recovered at the Miami 33, setting up its first score.

After moving to the 6-yard line, Harris took the snap and ran
untouched into the end zone to put Bowling Green up 7-0 with 11:46
left in the first quarter.

Both Miami and Bowling Green were playing in the championship
game for the first time.