Smith overcame some early accuracy problems and threw for three
touchdowns, ran for two more and finished with 435 yards of offense
to lead the (No. 19 ESPN/USA Today, No. 20 AP) Utes past Texas A&M 41-21 Thursday night. 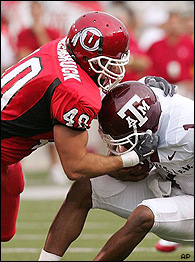 Smith and the Utes backed up their ranking with 582 yards of
offense and avenged their only non-conference loss of last season.
Local officials dubbed Thursday "Utah Day" and there were hours
of pregame festivities before the Utes took the field. Then, the
fun really started.

"If we spread you out like that, it's going to be tough to stop
us," said Smith, who passed for a personal-best 359 yards. "It
was nice, very nice."

Utah led 7-0 barely a minute into the game and scored the first
four touchdowns, despite some early incompletions from Smith.

"That first half could've been scary if we take advantage of
all those," Smith said of a handful overthrown passes and several
others that were dropped. "I was a little hyped up. I've been
waiting for this game for so long."

Smith, who completed 21 of 29 passes, topped his 340-yard
passing performance against Oregon last year. He also ran 13 times
for 76 yards.

The Aggies, who last season lost their last three games and five
of their last six, continued to struggle on defense. Utah scored
five times on defensive blunders in which the Utes were all but
untouched on their way into the end zone.

Texas A&M quarterback Reggie McNeal ran for two touchdowns,
including a 59-yarder late in the second quarter, but he struggled
with his passing.

"Too many drops and too many miscues here and there. They just
never let us get going," A&M coach Dennis Franchione said. "The
Utes played like they deserved to be in the Top 20."

A&M used 14 freshmen in its first season-opening loss in four
years. The last time the Aggies opened with a loss was also the
last time they started the season on the road, a 24-10 loss at
Notre Dame in 2000.

Utah was not an ideal opponent for a team that went 0-5 last
season away from Kyle Field. The Utes lost to the Aggies 28-26 a
year ago when a two-point conversion attempt failed in the final
seconds. There wasn't talk of revenge as the game approached, but
the Utes certainly felt vindicated after winning in front of a
sellout crowd of 45,419 at Rice-Eccles Stadium.

"I love to see that on national television, with Rice-Eccles
packed to the walls and our student section going crazy," Utah
coach Urban Meyer said. "It was a great night for Utah football."

Smith appeared a little anxious at the start. He overthrew three
receivers who had a stride or two on their defenders on plays that
could have resulted in touchdowns in the first half. Utah receivers
dropped at least three passes that were in their hands.

Smith also made an errant option pitch behind Marty Johnson, who
recovered the ball for a 20-yard loss. But with the way A&M's
defense was struggling, the Utes could afford some mistakes.

Steve Savoy caught a short pass over the middle and turned it
into a 78-yard touchdown just 1:13 into the first quarter, then
scored easily on an end-around from 9 yards out to start the second
quarter.

"That was our game plan: To come up and go no-huddle and get
them while they were getting used to the elevation," Savoy said.

Smith ran through a wide hole for a 7-yard TD and had a 38-yard
scoring pass to John Madsen, who didn't have an A&M player within
10 yards when he pulled down the pass and trotted down the
sideline. Smith also scored on a 37-yard run.

Johnson, playing for the first time in two years because of
injuries and a one-year suspension for drunken driving, gained 77
yards on 20 carries for the Utes.

"I was a little rusty, but it felt so good to be out there on
the field," Johnson said.