MIAMI (AP) -- Matt Leinart and his Southern California teammates
bounced around the end zone, then broke into a victory dance.

The celebration was on -- and it was only halftime.

Playing to perfection, the Heisman Trophy winner threw a record
five touchdown passes and the Trojans overwhelmed Oklahoma 55-19
Tuesday night in the Orange Bowl, ending the season just as they
started: No. 1.

"I think we proved tonight that we are the No. 1 team in the
country without a doubt," Leinart said. "No doubt."

Even better, there's no one they have to share it with.

The much-anticipated battle of unbeatens, No. 1 vs. No. 2,
turned into a coronation for USC, which had to settle for a share
of the national championship last year after being left out of the
Bowl Championship Series title game.

"We didn't expect it to be this easy, but the game went our way
from the beginning," USC coach Pete Carroll said. "I was a little
surprised."

That was no consolation for unbeaten Auburn, the odd team out of
the BCS title game this season.

The Tigers (13-0) stated their case with a 16-13 victory over
Virginia Tech in the Sugar Bowl on Monday night and could have done
no worse than Oklahoma against USC. But they finished
second in the final Associated Press poll.

USC became the first team to repeat as AP national champions
since Nebraska in 1994-95 and joined Florida State in 1999 as the
only teams to go wire-to-wire -- from preseason to post bowls -- as
No. 1.

"I think they're great, and they sure proved it," Oklahoma
coach Bob Stoops said. "We just got whupped."

Auburn coach Tommy Tuberville was on hand to witness the rout in
a game he believed his team should have been playing in.

"It's a little empty feeling," said Tuberville, who was at the
game. "You want to have some kind of recognition. I'm going to
take my own poll.

"I'd like to play the winner of this game," he said at
halftime, trying to be kind because by then the winner was hardly
in doubt.

USC was shut out of last season's BCS title game, despite
topping both the AP Top 25 and ESPN/USA Today Coaches' poll at the end of the
regular season. The BCS computer rankings favored Oklahoma, even
though the Sooners lost the Big 12 title game 35-7.

Oklahoma then washed out in the BCS championship game, losing to
LSU in the Sugar Bowl 21-14 to give the Tigers the top spot in the
ESPN/USA Today Coaches' poll.

The Trojans wrapped up their 2003 national title three days
before the BCS championship game by beating Michigan 28-14 in the
Rose Bowl.

They didn't have to wait for their trophy this season.

With the aid of four Oklahoma turnovers, the Trojans (13-0)
ambushed the Sooners (12-1) with 38 points in the final 20 minutes
of the first half.

The first meeting of Heisman winners couldn't have been more
one-sided. Leinart set an Orange Bowl record with his five scoring
tosses and Jason White spent another BCS title game running for his life.

Oklahoma's 2003 Heisman winner finished 24-of-36 for 244 yards with
three interceptions and two touchdowns. 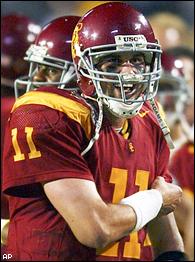 Leinart was 18-of-35 for 332 yards and he had the USC band
playing "Fight On" all night. The laid-back Californian who
replaced Carson Palmer became the first Heisman winner to win a
national title since Michigan's Charles Woodson in 1997.

Leinart looked nothing like the overrated quarterback for an
average offense, as Oklahoma defensive end Larry Birdine described
him.

"They were talking a lot of mess all month," USC defensive
Frostee Rucker said. "We heard it."

Leinart tossed four scores in the first half as the Trojans
turned an early 7-0 deficit into a 38-10 halftime lead.

And when the demolition had ended, the Trojans grooved in the
end zone as Outkast's "Hey Ya!" blared through Pro Player
Stadium. Meanwhile, the Sooners trudged off having already allowed
more points in a bowl game than any team in school history.

Leinart shrugged off Birdine's comment and played great in what
could be his farewell to college football. The junior could be a
top pick in the next NFL draft.

He also got plenty of help. The Trojans reached a season high
for points and turned the game into a USC highlight reel, with
Leinart making pinpoint passes and his receivers making spectacular
catches.

Senior Mark Bradley made a freshman mistake that set off one of
those USC runs that have done in so many opponents during the
Trojans' 22-game winning streak.

The Sooners' most versatile player and the son of former
Oklahoma quarterback Danny Bradley tried to scoop up a punt that
had bounced inside the Oklahoma 5. Collin Ashton grabbed on to
Bradley, the ball squirted away and USC recovered at the 6.

Bradley trudged back to the sideline, where he received some
pats on the head and back.

His mood no doubt worsened on the next play, when LenDale White
reached the ball over the goal line to give the Trojans a 14-7 lead
late in the first quarter.

USC made it 21 straight points with the help of Oklahoma's
second turnover. Under pressure, Jason White heaved a deep ball into
quadruple-coverage and Jason Leach came up with USC's 20th
interception of the season.

Then the Trojans went to work on Oklahoma freshman cornerback
Marcus Walker with their own star freshman, Dwayne Jarrett.

Walker ended up in no-man's land on the next play. He looked
like he wanted to blitz but stopped. Meanwhile, Jarrett ran
straight down the sideline and hauled in a perfect throw from
Leinart for a 54-yard score.

White was upended while throwing and was picked off by Eric
Wright deep in Sooners territory.

This time Leinart found Smith alone in the end zone from 5 yards
out, to cap a four-touchdown barrage.

Oklahoma drove for a field goal on the next possession, but all
it did was give USC enough time to catch its breath.

Reggie Bush ripped off a 33-yard run to start the Trojans on
their way and Leinart again picked on a secondary that looked like
Oklahoma's soft spot much of the season.

Leinart went deep to Smith, who hauled in a 33-yarder while
hitting the ground to make it 35-10.

Carroll greeted Leinart with a hug after the left-hander's
fourth touchdown pass. Leinart gave a sly grin as he glanced up at
the scoreboard.

An aching White trudged into and then limped through the Sugar
Bowl last year. But he was spry and agile against the Trojans at
the start.

He rolled out, scrambled and stepped up in the pocket while
completing four of his first five passes for 75 yards. He finished
the 92-yard TD drive by zipping a 5-yarder to Travis Wilson.

Leinart answered quickly, hitting four straight and finding
Dominique Byrd deep down the middle for a spinning, one-handed
33-yard touchdown. It was the first touchdown the Sooners had
allowed in four games.

And it would only get worse from there for Oklahoma.