BOISE, Idaho (AP) -- When Ian Johnson came to Boise State, the
program was flush with running backs. As Johnson says, he was just seeking "a piece of the pie."

On Thursday night, the sophomore introduced himself as the signature back for the Broncos' potent offense, which isn't just about throwing the ball anymore. 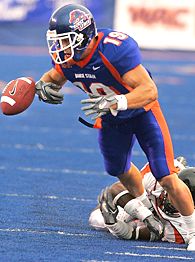 Showing speed in the open field, the power to break tackles and patience in waiting for holes, Johnson rushed for a career-high 240 yards and five touchdowns in the Broncos' 42-14 rout of Oregon State.

"It still shocks me," said Johnson, who had 22 carries. "I'm greedy. I wanted to keep going. I wanted to go in at the end of the game."

The Broncos (2-0) in general were quite greedy. After staking the Beavers to a 14-0 lead, Boise State scored 42 unanswered points. Johnson's five TDs tied a school record, and he had the third-best ground game in school history.

Johnson's previous career high was 103 yards in last year's season finale against Louisiana Tech. He ran for 136 yards in the first half Thursday night, highlighted by a 59-yard touchdown run.

Patience was the biggest key for Johnson, and one of the few lessons learned in last week's 45-0 shutout of Division I-AA Sacramento State. Johnson rushed for 89 yards on 13 carries and two touchdowns against the Hornets, but noticed on film that he wasn't waiting for blocks to develop.

On Thursday night, Johnson slowed down and waited for his linemen to pave a path.

"Their blocking was crisp. We didn't defeat blocks and get off very well," Oregon State coach Mike Riley said. "They were pretty relentless with the run."

It was the third straight year that the eventual loser in this matchup took a 14-0 lead, and was Boise State's second win against a Pacific-10 Conference school, both against Oregon State.

"I wasn't really feeling that was a good sign at that point," Boise State coach Chris Petersen said of the early deficit. "We can get behind and not panic, and in the past, if we weren't scoring a lot of points ... I would start to get a little uptight."

With the Boise foothills suffocated by smoke from wildfires in the region and a blustery thunder and lightning storm blowing through, the Broncos blitzed Oregon State for four touchdowns in a span of 16:12 in the first half.

Johnson was nearly unstoppable. On his 59-yard TD run, Johnson broke an arm tackle at the line of scrimmage, then sprinted away from two defensive backs in the open field.

He added TD runs of 4 and 3 yards in the second quarter and carried defenders into the end zone on his 19-yard TD run in the third quarter, one play after Oregon State's Yvenson Bernard fumbled.

"Ian showed flashes and signs all last year and we just had a stable of guys that the way we do things here is we play a lot of guys," Petersen said. "Ian didn't get the touches he probably should have last year."

Not simply a ground threat, Johnson also caught a 21-yard pass from quarterback Jared Zabransky to set up Zabranksy's 3-yard TD toss to Legedu Naanee in the second quarter.

Oregon State (1-1) started strong, using a fake punt on fourth-and-1 at its 26 and Bernard's running to take a 7-0 lead. Bernard carried seven consecutive times for 46 yards after the fake, setting up Matt Moore's 3-yard TD pass to Joe Newton.

The Beavers then went ahead 14-0 when Sammie Stroughter broke four tackles, cut across the field and returned a line-drive punt 64 yards for a score. Stroughter had a 51-yard punt return TD last week against Eastern Washington.

Other than the first drive, Bernard was held in check, rushing for 89 yards on 24 carries. Moore was 12-for-17 for 115 yards and was replaced in the final quarter by freshman Sean Canfield.

Moore was intercepted late in the first quarter by linebacker Korey Hall, who had three interceptions against the Beavers two years ago in Boise.

"The execution wasn't there," Moore said. "With those scores and us going three-and-out, that really changed the game."