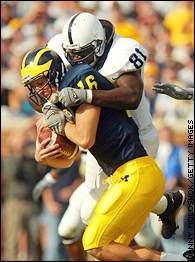 After both teams trudged through the first 42-plus minutes tied
at 7, they combined for 28 points and three lead changes. John
Navarre's second TD pass to Braylon Edwards -- his third option in a
crowded end zone -- with 3:24 left forced the first overtime ever at
Michigan Stadium.

"That's what a great football game is,'' Michigan coach Lloyd
Carr said. "It's back-and-forth, and you win it, and then you lose
it, then you win it.''

"They've all been great wins, but none have been more
exciting,'' Carr said. "This one had everything.''

Penn State coach Joe Paterno, the winningest coach in Division
I-A, was so upset after the game that he wouldn't allow his players
to be interviewed.

Michigan won the toss in overtime and chose to let Penn State
have the ball first.

Nittany Lions kicker Robbie Gould -- who missed an extra point
and a field goal in regulation -- missed a 23-yard field goal in
overtime. But Michigan was called for offsides, and Gould took
advantage of the opportunity with a 20-yard kick to put Penn State
ahead 24-21.

"Don't blame it on the kicker,'' Paterno said.

On Michigan's possession, Perry gained 4 yards on a third-and-1
from Penn State's 16. Four plays later, he plunged in for the
score.

When Perry was mobbed by his teammates during a wild celebration
in the end zone, he had one thought: "I made sure I didn't fall,''
he said.

Navarre was 27-of-41 for 244 yards with no interceptions and two
TD passes to Edwards. Navarre did a good job of moving up and
around the pocket to deliver passes, sometimes to his second or
third option.

"It was the most comfortable I've felt,'' Navarre said.

Zack Mills was 19-of-31 for 264 yards with two TDs and no
interceptions, despite a sprained shoulder. Larry Johnson ran for
78 yards and a TD on a sore hamstring.

Bryant Johnson caught seven passes for 138 yards and a touchdown
_ against Thorpe Award candidate Marlin Jackson -- but had a
potential TD in overtime ripped out of his hands by Jackson.

Before Michigan's current six-game winning streak, the Nittany
Lions had not lost six straight in a series since Pittsburgh beat
them 10 times in a row from 1922-31.

The fun started when Penn State went ahead 13-7 with 2:40 left
in the third quarter on Mills' 9-yard pass to Mike Lukac, his first
career TD catch. Gould missed the extra point. On Penn State's
previous possession, he missed a 47-yard field goal.

Michigan took advantage of a break on the ensuing possession.

The Wolverines were forced to punt from their 10 after three
incomplete passes, but the drive was kept alive when James Milton
was flagged for roughing the kicker.

Penn State responded with an 80-yard go-ahead drive, capped by
Mills' 19-yard pass to Bryant Johnson. A 2-point pass from Mills to
Bryant Johnson put the Nittany Lions ahead 21-14 with 7:49 to go.

Michigan came right back to tie the game with 3:24 left.

On a third-and-goal from the 3, Navarre looked right and when he
didn't see anybody open, he connected with Edwards for a second TD
across the middle.

"If John Navarre didn't silence his critics, there's no point
in them being involved with football,'' Edwards said.

The Wolverines were able to fully enjoy the win because
cornerback Zia Combs -- who was taken off the field on a stretcher
after his helmet collided with a teammate's midsection in the first
quarter -- has full movement, no broken bones and negative X-rays.
Combs was to be hospitalized overnight for observation.