On a day when freshman running back Maurice Clarett missed most
of the game with a shoulder injury, Gamble's performance was
something to shout about.

The wide receiver made a stellar debut as a starting defensive
back by returning an interception for a touchdown and preventing a
score with a tackle in No. 4 Ohio State's 13-7 victory over Penn State (No. 17 ESPN/USA Today, No. 18 AP) on Saturday.

"It feels good to get my name chanted by the crowd,'' the
soft-spoken Gamble said after he was hailed by 105,103 at Ohio
Stadium.

The victory helped the Buckeyes (9-0, 4-0) stay on course for
the Big Ten title. They don't play Iowa (8-1, 5-0) this season, but
they have the inside track to the Rose Bowl, since they have a
better overall record.

"They're the best team we've played. It'd be close between them
and Iowa,'' said Penn State coach Joe Paterno, whose team lost in
overtime to the Hawkeyes. "Do they play Iowa? That would be a
pretty good game.''

Indeed it would. And if Penn State could have knocked off the
Buckeyes, Iowa would have a clear path to Pasadena. But the Nittany
Lions (5-3, 2-3) managed just five first downs and 179 total yards.

"We got licked,'' Paterno said.

Clarett, who missed a game earlier this season with a knee
injury, hurt his left shoulder six plays into the game and did not
return. He'd been averaging 140 yards a game and was off to another
fast start Saturday, gaining 39 yards on four carries to give him
1,019 yards in just over seven games.

Ohio State coach Jim Tressel said he was unsure of the nature or
the severity of the injury.

Gamble picked up the slack by becoming the first Ohio State
player since Paul Warfield in 1963 to start on both sides of the
ball. Gamble entered the game as the Buckeyes' second-leading
receiver, and lately he'd been called on more and more to help out
the thin, inexperienced cornerbacks.

Before Saturday, he had played just five snaps on defense, with
two interceptions.

With Ohio State trailing 7-3 early in the third quarter, Gamble
picked off an underthrown floater by quarterback Zack Mills. Gamble
raced down the right sideline, cut to the inside briefly and then
sidestepped a tackler to slide into the end zone for a 40-yard
score.

"I saw Zack Mills rolling to the left, the one dude running the
post and the other dude running the wheel (pass route),'' Gamble
said. "I saw him throw it to the wheel, and I just attacked it.''

Gamble's other huge play came during the turnover-plagued first
half. On third-and-goal from the Penn State 5, Buckeyes quarterback
Craig Krenzel fumbled while trying to get the ball across the goal
line. Anwar Phillips scooped up the ball at the 1 and raced 58
yards before Gamble brought him down. 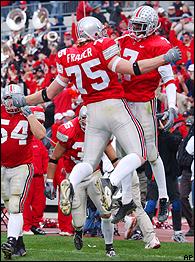 "Chris Gamble's a great player, but he's a smart player,''
Tressel said. "There's a lot of talented players in the world, but
they all don't have a feel for the game. He's blessed with talent,
and he pays close attention to what's going on the field.''

Ohio State's defense dominated for most of the second half. The
Nittany Lions -- who had been averaging 37 points a game -- punted on
their next four possessions after Gamble's interception return.

Bryant Johnson, Mills and Paterno -- who has been very critical
of Big Ten officiating -- all protested that Johnson had been
interfered with by Gamble, but the play stood, and the Buckeyes ran
out the clock.

"I tapped him a little early and was relieved when there was no
flag,'' Gamble said.

Penn State's Larry Johnson said, "It shouldn't have come down
to us hoping to have a pass interference called.''

Coming off a school-record 257 yards rushing a week ago in a
rout of Northwestern, Johnson was limited to 66 yards on 16
carries.

Krenzel, who completed 13 of 20 passes for 112 yards, was
intercepted twice. He added 39 yards rushing on 15 carries.

Mills, who had a school-record 418 yards of total offense a year
ago in a 29-27 comeback win over Ohio State, struggled all day. He
completed 14 of 28 passes for 98 yards and was picked off three
times -- equaling his total in 199 pass attempts in the Lions' first
seven games.