The Longhorns responded by saying the ground game would come. 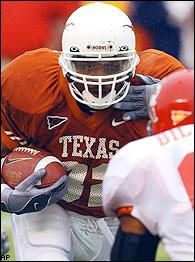 Cedric Benson ran for 199 yards and two touchdowns on 30 carries
-- including a 59-yarder that put Texas ahead in the third quarter --
as the 'Horns revived a punishing ground game that all but
disappeared.

"We were tired of playing like we weren't a top team,'' said
Benson, who had 45 carries for 113 yards in the previous two games
while playing with a nagging turf toe injury.

"It started to make some guys sick.''

Texas (7-1, 3-1 Big 12) sealed its 17th straight win at home on
Selvin Young's 2-yard TD in the fourth. The play capped an 80-yard
drive in which the Longhorns converted a fourth-and-1 at the Iowa
State 21 and chewed up more than nine minutes.

"It's been a long time since we had a 19-play drive that
changed the momentum of the game for us,'' Texas coach Mack Brown
said.

Texas' Royal-Memorial Stadium was soggy after a week of rain and
under a steady drizzle Saturday. The Longhorns worried that would
favor the shifty Wallace.

"I've always felt a wet field was to the advantage of the
offense,'' Brown said. "We thought it was a Seneca Wallace day. We
needed to get our running game back on track to keep the ball out
of his hands.''

Held to just 43 yards passing in a loss to Oklahoma, Wallace was
much better against Texas with 226 yards and a touchdown.

But he didn't make the big plays the Cyclones needed as Texas'
second-ranked defense held Iowa State to 286 total yards. He was 18
of 31 passing with an interception and rushed for 15 yards.

A Heisman Trophy favorite two weeks ago, Wallace might have
surged back to the front of the race with a win or a big game.

"We're the only team in the country to play back-to-back games
on the road against top 10 teams,'' Iowa State coach Dan McCarney
said. "It's been a long two weeks. We're sick of losing.''

Wallace couldn't do anything to counter Benson's performance.
Benson ran for 61 yards and a 2-yard TD in Texas' opening drive for
a 7-0 lead.

The Longhorns would come back to him after the Cyclones grabbed
the lead.

On the 59-yard run, Benson swept left, cut back between a pair
of defenders and raced to the end zone before stretching out over a
tackler at the 2 to give Texas a 14-10 lead.

The Cyclones dominated the second quarter but missed a chance
for a TD when they couldn't punch it in on first-and-goal from the
2. Benike kicked a 24-yard field goal that was wiped out by a
penalty, and he missed the retry from 29.

"That was a huge momentum swing,'' McCarney said. "That was as
big a series as you could have and to come away with no points
really hurt us.''

Iowa State wasted another opportunity when Nik Moser blocked a
Texas punt in the third quarter and took over at the Texas 29. But
the Cyclones picked up just one first down, and Benike missed a
32-yarder that would have cut the Texas lead to 14-13.