ATHENS, Ga. (AP) -- By halftime, Georgia made sure that Alabama
wouldn't have to endure another heartbreaking loss.

The Bulldogs (No. 12 ESPN/USA Today, No. 11 Associated Press) scored 37 points in the first two quarters --
the most Alabama has given up in a half in the modern era. Then,
they held on for a sloppy 37-23 victory over the Crimson Tide on
Saturday. 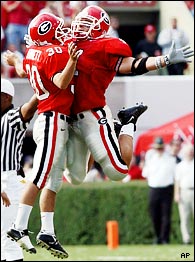 "We were able to wreak some havoc out there," said Georgia
safety Thomas Davis, who scored off a blocked punt, recovered a
fumble to set up another score and had two sacks.

The Tide's first three losses -- all against teams now ranked in
the Top 25 -- came by a combined 13 points. Last week, Alabama
squandered a 21-point lead in the second half and lost to No. 8
Arkansas 34-31 in overtime.

This time, Alabama found itself in a big hole. Georgia built a
37-10 lead at halftime, which was more points than the Bulldogs had
scored on the Tide in any of the previous 62 games between the
schools.

Also, Alabama officials said it was the most points given up by
the Tide in a half since at least 1933 -- the first season of the
Southeastern Conference. School records are incomplete before that
year.

"It's tough to overcome," running back Shaud Williams said.
"It's like getting kicked in the stomach."

Alabama made the score respectable in the second half -- mainly
through Georgia's own mistakes.

Charles Jones returned his second interception 30 yards for a
touchdown, and Juwan Garth scooped up a botched punt and brought it
back 10 yards for a touchdown early in the fourth quarter to give
the Tide some hope.

"This is a tough league. Anytime you win, it's a good thing,"
coach Mark Richt said. "I'll remind myself of that when I'm
watching tape of the second half. It was definitely a tale of two
halves."

Fortunately for the Bulldogs, Alabama wasn't equipped for a
comeback. The Tide finished the game with third-string quarterback
Brandon Avalos, a redshirt freshman playing his first college game.
He had to come in when starter Brodie Croyle and backup Spencer
Pennington both went down with injuries.

With Croyle still bothered by a separated shoulder, Pennington
started. When Alabama fell down by 27 points, coach Mike Shula made
the questionable decision to bring in Croyle.

He lasted two plays. Croyle landed hard on his sore shoulder
when Odell Thurman leveled the quarterback with a vicious hit.
Pennington returned, only to leave with his own shoulder injury in
the third quarter. He watched the rest of the game with his right
arm in a sling.

"We were looking for a spark," Shula said. "If we were going
to have a chance, we had to put Brodie in."

Then, in less than six minutes, the Bulldogs pushed the lead to
30-3.

Jarrett Berry blocked a punt by Bo Freeland, Davis picked it up
and ran 7 yards for a TD.

After Alabama failed to convert on fourth-and-inches at its own
44, backup quarterback D.J. Shockley quickly led the Bulldogs to
another score, connecting with Jamario Smith on a 10-yard touchdown
pass.

On the ensuing kickoff, Ramzee Robinson ran into a teammate and
fumbled. Davis recovered and ran to the Alabama 13 to set up
freshman Kregg Lumpkin, who scored the first touchdown of his
career on a 1-yard run.

After Croyle's injury, Pennington and the Tide finally made a
first down with about 6{ minutes left in the half. Alabama wound up
scoring, as Dre Fulgham hauled in an 18-yard touchdown pass from
Pennington to make it 30-10.

But Georgia added another touchdown with 30 seconds left in the
half on David Greene's 3-yard pass to Ben Watson. The Bulldogs got
the ball after Pennington fumbled a snap.

Georgia piled up 297 yards and 16 first downs in the first half.
That was especially impressive with leading rusher Michael Cooper
and leading receiver Reggie Brown both out with injuries.

The Bulldogs were bolstered by the return of Watson and receiver
Fred Gibson, who had missed the LSU game with injuries.

By the second half, the crowd of more than 92,000 had lost
interest. When the public address announcer said the Atlanta Braves
were leading the Chicago Cubs in the NL division series, the fans
began chanting and performing the tomahawk chop.

But Georgia let the Tide hang around with some strange
play-calling. In the third quarter, for example, the Bulldogs threw
12 passes and ran only three times, slowing the clock.

"I probably got a little greedy," Richt conceded.

Greene threw for 252 yards but also had two interceptions. In
all, mistakes by the offense and special teams led to 17 points for
Alabama, which hurt the Bulldogs' No. 2 national ranking in points
allowed (8.5 per game).

"They shut (Alabama) down just about the entire ballgame,"
Richt said. "It's just a shame for our defense."