EVANSTON, Ill. (AP) -- Minnesota scarcely resembled the Big Ten's
highest-scoring team for much of the first half Saturday, failing
to manage a single first down against lowly Northwestern for more
than 21 minutes. 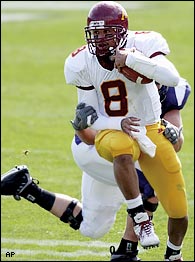 Then the Gophers (No. 16 ESPN/USA Today, No. 21 Associated Press) struck suddenly, on a game-changing
96-yard bomb from Asad Abdul-Khaliq to Jared Ellerson, and didn't
stop on their way to a 42-17 victory.

Abdul-Khaliq threw for three touchdowns and Marion Barber III
ran for two as Minnesota improved to 6-0 (2-0 Big Ten) for the
first time in 43 years heading into a Friday night matchup at home
against No. 9 Michigan.

"I was very pleased with how the game turned out, but I wasn't
very happy with how it started," Gophers coach Glen Mason said.
"The first quarter was the worst quarter of football from my
perspective I've ever been associated with as a coach. ... The
positive was no one panicked, no one started pointing fingers."

The nation's third-leading rushing team produced 241 yards on
the ground, 43 yards below its season average. But the passing
attack keyed a big-play offense, carrying the Gophers to 572 total
yards despite the slow start.

Abdul-Khaliq, the Big Ten's leader in passing efficiency, missed
on four of his first five passes before finishing 12-for-17 for 331
yards. Two of his TDs came on fly patterns to Ellerson -- the
school-record 96-yarder and another for 82 yards.

Barber's pair of 31-yard scoring runs, accounting for most of
his 77 yards, gave him 13 TDs for the season. That tied a school
record in just six games.

Minnesota had just 8 yards on its first four possessions. Backed
up at the 1 and trailing 14-0 near the midway point of the second
period, the Gophers appeared in danger of losing to Northwestern
(2-4, 0-2) for the sixth time in eight years.

But on third down from the 4, Abdul-Khaliq dropped back into the
end zone and heaved a pass down the right sideline to Ellerson, who
was 15 yards behind the nearest defender after cornerback Jeff
Backes tripped and fell. Ellerson's TD made it 14-7, and he said
the Wildcats' attitude clearly changed with the big play.

"Yeah, you could see it in their eyes after that," he said.
"They were scared. They saw we started getting on a roll."

Three minutes later Barber raced untouched around left end to
tie the score. Then following an interception by Justin Fraley near
midfield, the Gophers took the lead for good at 21-14 on an 8-yard
pass from Abdul-Khaliq pass to Ben Utecht.

Northwestern closed to 21-17 on a 39-yard field goal by Slade
Larscheid just before halftime, but Abdul-Khaliq hit Ellerson on
the 82-yard play on the second play of the second half and the
Wildcats never threatened again.

Barber skirted right end seven minutes later to make it 35-17. A
32-yard TD pass from Abdul-Khaliq to Aaron Hosack was the only
scoring of the final quarter.

Northwestern dominated both lines in racing to a 14-0 lead in
the first quarter. Jason Wright ran in from 12 yards out and
quarterback Brett Basanez scored on a 2-yard keeper. The Wildcats
were in Minnesota territory again when Basanez's pass was picked
off at the 38 by Eli Ward -- a play Mason said was key because "it
gave us some confidence that we could play a little defense."

After amassing 146 yards on offense and 10 first downs in the
opening period, the Wildcats managed only 138 yards and five first
downs the rest of the way.

Basanez was 19-for-32 for 196 yards and two interceptions.
Northwestern's rushing attack averaged just 2.2 yards a carry for
76 yards.

"We got it rolling" in the first half, coach Randy Walker
said. "Then we just had a couple of setbacks ... and the air came
out of the balloon.

"They made some big plays, and big plays are disheartening. I
felt like we gave this one away, and I think our kids felt that
way."

Northwestern wide receiver Kunle Patrick caught a pass in his
40th straight game -- the longest such streak in the nation.