TUSCALOOSA, Ala. (AP) -- The Alabama-Tennessee rivalry still packs quite a punch. 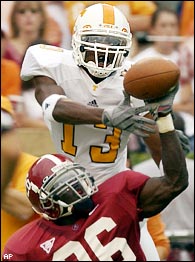 Casey Clausen carried the 22nd-ranked Volunteers into the fifth overtime with his arm, then won it with a 1-yard quarterback sneak in a 51-43 victory over the Crimson Tide Saturday.

"This was a Tennessee-Alabama classic game," Vols linebacker
Robert Peace said. "You can tell both teams wanted it and that we
were both exhausted."

Corey Larkins gained 20 yards on three carries to start the fifth OT and Alabama had an offsides penalty. On third down from the 2, Clausen rolled right and dove toward the goal line.

He was stopped just short but did get the first down and scored
on the next play. Clausen then hit a leaping James Banks for the 2-point conversion, with the NCAA mandating that teams go for two following touchdowns after the first two OTs.

The Tide (3-6, 1-4) has lost five of its last six games, twice
in overtime. Alabama couldn't get a first down in the final OT,
with Williams stopped on both second-and-1 and third-and-1 from the
16.

Brodie Croyle lofted a fourth-down pass to Dre Fulgham in the
end zone, but Jason Allen batted it away. Once again, Alabama's
players slumped off the field with a tough loss.

"Just when you think you've seen it all and been through a lot
of ups and downs, all of a sudden there's a game like this,"
Alabama coach Mike Shula said.

"We all know what Alabama-Tennessee is about, we'd all like to
be celebrating in there but we're not, and it hurts. But I truly
believe this team will be better because of it."

The marathon victory kept the Vols in contention in the SEC East
after getting routed 41-14 against Georgia at home two weeks ago in
one of the program's biggest embarrassments in years.

That includes Banks, who had a few drops in the game but more
than made up for them.

A game Alabama led 6-3 at halftime turned wild in the second
half, then became a marathon with two proud programs trying to
salvage disappointing seasons.

Alabama offensive tackle Wesley Britt broke his left leg in the game's first quarter, and was carted off on a stretcher.

"Your heart goes out to him," Shula said.

Britt, a junior preseason All-SEC pick, has started 34 games in
his Tide career. He is on the watch list for the Lombardi Award
given to the nation's top collegiate lineman.

Tennessee hadn't lost three straight games since 1992, the year
before Phillip Fulmer was officially elevated to head coach.
Clausen made sure that stretch was extended.

Clausen, who sent the game into overtime with a 1-yard touchdown pass to Troy Fleming with 1:52 left, threw three more in the extra periods. He hit Derrick Tinsley on a 6-yarder and found Banks for
TDs of 6 and 25 yards before the game-winner.

Clausen set up the score in the third OT with a 29-yard pass to
C.J. Fayton on fourth-and-19.

"There's not a tougher-minded quarterback in the country than
Casey Clausen, mentally and physically," Fulmer said. "There's no
question if there's time left on the clock, he's going to have a
chance to win."

Both teams had to settle for field goals in the fourth OT.

Alabama got 12-yard touchdown runs from Williams and Tim
Castille and Croyle's 6-yard pass to Fulgham in the extra sessions.

Banks caught seven passes for 103 yards and two touchdowns. He
also scored on a 25-yard run after lining up at quarterback for the
first time this season.

Williams carried 40 times for 166 yards for the Tide while
Croyle was 21-of-38 for 215 yards and two touchdowns with an
interception.

Alabama took a 20-13 lead with 4:47 left in the fourth quarter
on Ray Hudson's 2-yard run. Tennessee then went three-and-out but
the Tide also couldn't get a first down to run off the final three
minutes as Williams was stopped a couple of inches short.

Clausen then took over with 1:52 left and no timeouts, hitting
six of eight passes for 81 yards. He faked the handoff to Cedric
Houston and found a wide-open Troy Fleming in the end zone for a
1-yard touchdown with 25 seconds left.

Clausen had completed just two second-half passes before that
drive.

Speedy freshman Tyrone Prothro then scooped up the short kickoff
and raced 38 yards before he was pushed out of bounds. A 15-yard
facemask penalty set up Alabama at Tennessee's 31 with 17 seconds
left. Williams' run pushed it 4 yards closer but Brian Bostick's
44-yard attempt fell well short.

Tennessee lost three fumbles in the first quarter as both teams
struggled to generate any offense in the first half.

"I just don't know why we wait so long to get it done," Fulmer
said.