IOWA CITY, Iowa (AP) -- Iowa wanted to protect the pig and defend
its turf. With some timely turnovers, the Hawkeyes did both.

No. 20 Iowa recovered four fumbles and intercepted a pass, and
Nate Kaeding tied his own school record with four field goals in a
40-22 victory over Minnesota (No. 17 ESPN/USA Today, No. 19 AP) on Saturday. 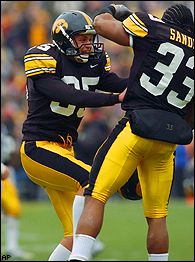 "We bent a little too much," Iowa linebacker Grant Steen said.
"They had some yards and too many big plays. But we did a great
job when it got down to crunch time to get the big turnover."

The Hawkeyes' opportunistic defense ensured that Floyd of
Rosedale, the pig statue that goes to the Iowa-Minnesota winner,
will stay in Iowa City for the third straight year.

Minnesota, playing its regular-season finale, lost three fumbles
after driving deep into Iowa territory -- one when Laurence Maroney
was about to score. The Gophers were leading the nation in rushing
with an average of 304 yards per game but managed only 54 while the
game was being decided in the middle two quarters.

Until Thomas Tapeh scored on a 2-yard run with 4:52 left,
Minnesota had nothing to show for all its yards except field goals
of 33 and 44 yards by Rhys Lloyd.

"I don't think we really cared too much about people hyping
them up on offense," Iowa defensive end Howard Hodges said. "It
was more like, they're coming into Kinnick (Stadium) and they
wanted to run across the field and take Floyd from us.

Minnesota quarterback Asad Abdul-Khaliq, returning after hurting
his left shoulder against Wisconsin a week ago, became the school's
career leader in total offense but lost three fumbles and threw an
interception. He threw for 388 yards but had no touchdown passes.

Adding to the Gophers' difficulties, they played most of the
game without leading rusher Marion Barber III, who left with a
groin injury after gaining 25 yards on the Gophers' first two plays
and did not return.

"For some reason, we had some crucial turnovers in the red zone
trying to go into score," Abdul-Khaliq said. "You can't win
football games like that. I wouldn't say it had anything to do with
playing a certain defense or a great defense. It was just something
that we did or didn't do.

"They just created turnovers and we kind of helped them out."

Nathan Chandler threw a 6-yard touchdown pass to Ramon Ochoa and
scored on a 2-yard run for Iowa, while Jermelle Lewis ran 34 yards
for a touchdown with the help of a downfield block from Ochoa.

Kaeding kicked a 55-yard field goal with 2 seconds left in the
first half, tying the longest of his career, and added kicks of 27,
33 and 38 yards. It was the fourth time he has kicked four in a
game.

"I really thought our defense rose to the occasion a number of
times," Minnesota coach Glen Mason said. "If those field goals
had translated into touchdowns, it could have been a lot worse."

Trailing 10-6, Minnesota reached the Iowa 12 on Abdul-Khaliq's
26-yard completion to Aaron Hosack. But Abdul-Khaliq fumbled when
he was sacked by Tyler Luebke on the next play and Matt Roth
recovered for Iowa.

Later in the opening half, Abdul-Khaliq connected with Jared
Ellerson on a 66-yard pass to the Iowa 2 and the Gophers seemed to
have a sure touchdown on the next play when Maroney burst through a
hole in the middle.

But Iowa's Bob Sanders punched the ball away with his left hand
just as Maroney was about to cross the goal line and fell on the
ball inside the 1 with 2:06 left in the half.

"I was in, I knew I was in," Maroney said. "My whole body was
over the line. I was getting up, so I thought I had a touchdown,
and the ref said the ball was down."

Sanders forced another fumble when he sacked Abdul-Khaliq on the
third play of the second half. Iowa's Kevin Worthy recovered at the
Minnesota 19, setting up a 33-yard field goal by Kaeding that made
it 23-6.

Ochoa's 41-yard punt return set up Kaeding's 38-yard field goal,
and Iowa got the ball back a few minutes later when Abdul-Khaliq
threw short on a down-and-out and Jovon Johnson picked it off.
Chandler connected with Ochoa on a perfectly timed throw four plays
later to make it 33-6.