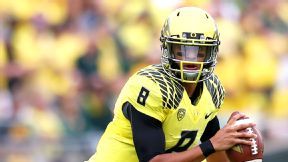 Marcus Mariota is the two-time All-Pac-12 first-team quarterback. How far can he lead Oregon?